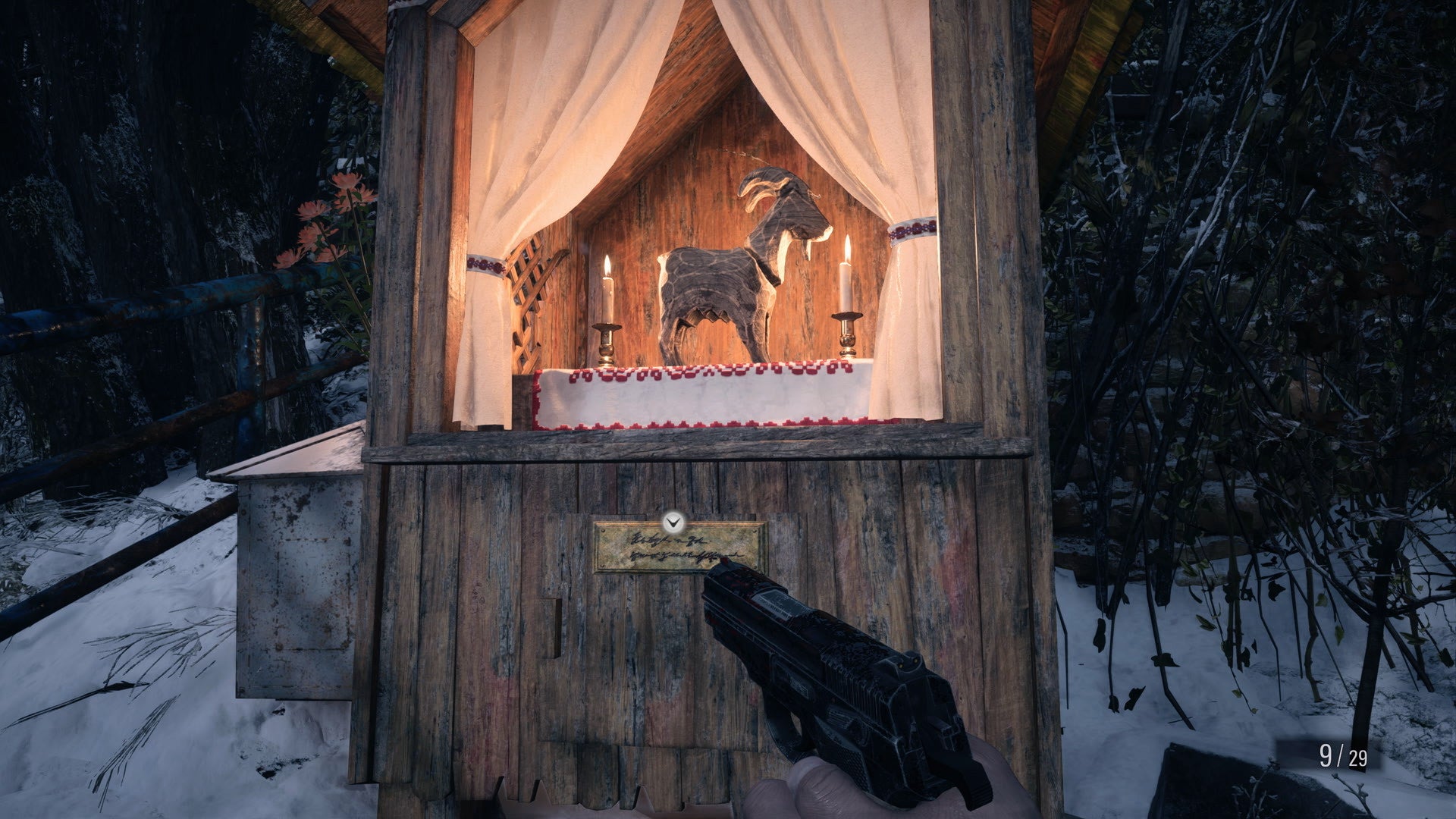 Below, you’ll find details on where each goat is located and how to find them, in the order they can be found during the story.

As you enter the yard with the church, be sure to look up onto the roof of the building, and checking the left side, you should spot another Goat of Warding perched on top that you can snipe. This is an easy one to miss, but will remain in its same spot with each return visit to the village.

If you stick to the far left side of the Fallow Plot, you can hop a small fence and move up a small path to a stone wall behind a shack. Though it’s a dead end, look on the stone wall to spot another wooden goat you can shoot with your handgun. It’s easy to miss this one, especially when distracted by Lycans.

As you explore the creepy vineyard outside, check along the walls near the “scarecrows” to spot a goat along the rocky outcroppings, and shoot it to break the bobbling trinket. This is another tricky one to find, and can be missed pretty easily. If you listen carefully, you can usually hear them, too!

As you descend into the depths of the Distillery, look near the candles to spot another bobbling goat you can destroy. This one makes some fairly loud noises, so it’s easy to spot once you’re down there.

Once you enter the Attic, look around from where you came up to spy another bobbling Goat nearby behind the ladder among some boxes. This is another one that’s easy to find simple by listening for it.

There’s another Lycan down by the docks below you can get the drop on, and if you search the small dark room nearby, you’ll find a noisy Goat of Warding to break. This one is easy to miss while searching around by the docks.

Be sure to look around the graveyard for a Herb, a crate to break, and a Goat of Warding behind one of the mausoleums in the back. This one can be easily missed if you’re not searching every corner.

Look between Luthier’s house and the shack to find a small area, and on top of a firewood pile you can find another goat to shoot. This one isn’t easy to miss. You’ll hear it bobbling around while outside!

As you reach the incredibly nerve-wracking suspension bridge, fear not, it will hold. More importantly, if you look to the left at another bridge, you can spy a Goat of Warding to snipe from your location before crossing the bridge. This one isn’t easy to miss, as it’ll be very visible against the foggy background.

Before entering, you can search the cliffside to find a small set of stairs to overlook the waterfall, and there’s another Goat of Warding just behind the fence you can break. If you don’t go searching around the house before entering, though, this is an easy one to miss.

Be sure to look around at the other side of the windmill to find a Goat of Warding that’s hiding among a pile of logs. This is a pretty easy one to find while walking around the windmill.

This is a tough one to spot, but look out across the water from the building with the minecarts towards the broken windmill in the distance to spot some large wooden beams sticking vertically out of the water like a ship’s mast. At the top of these planks is a lone goat perched precariously, and you’ll need to snipe it from a distance.

As you exit the other side of the mill, look to the left for a Goat of Warding perched right on some rocks. This is a fairly easy one to spot.

Under the mill itself, look for a small shrine in the middle of the stream to find another goat you can destroy. You can see it glowing a bit from afar, so it’s not too hard to miss.

Once you reach the bottom of the stairwell, look along the railing to the right to spot a bobbling Goat of Warding to smash before moving on. If you’re rushing through, it can be easy to miss. Listen closely!

While in the Ventilation area, head to the very edge overlooking the Grinder Shaft where some bulldozer blades keep the scrap back, and wedged in them you can find a little lost bobbling goat to destroy.

This is a tricky wooden goat to spot. Take a look out the open lift door as you ride down with The Duke. In between B1 and B3, there’s a goat perched along the red support girders going down. You’ll either need to be quick to spot and shoot it, or you can try climbing the ladder outside the lift on B3 and looking back to spot it above and snipe it.

After defeating Sturm and finding Heisenberg’s Diary and Cigar, you’ll hear a goat bobbling around. If you look at your map, you’ll spot a small room nearby, and if you look around there’s a small open vent to the right of the diary that you can crawl through. Here, you’ll find a goat on top of a barrel.

After you attach the detonator to the megamycete, if you look to the right there’s a really dark pool of water full of spiky roots, and a large statue. The goat is at the base.

Wraith: The Oblivion – Afterlife Is the First Ever World of Darkness VR Game – IGN

The World of Darkness is coming to VR with a new title, Wraith: The Oblivion - Afterlife. This VR title will exist in...
Read more
Gaming

Hades Has Been Rated For PS4 by Korean Rating Committee – IGN

Hades has been rated for PS4 by Korea's Game Rating and Administration Committee, hinting that Supergiant Games' rougue-like will soon be making its...
Read more
Gaming

If you've ever stopped yourself while using your Xbox Series X to wonder why your controller doesn't have more denim on it, Xbox...
Read more