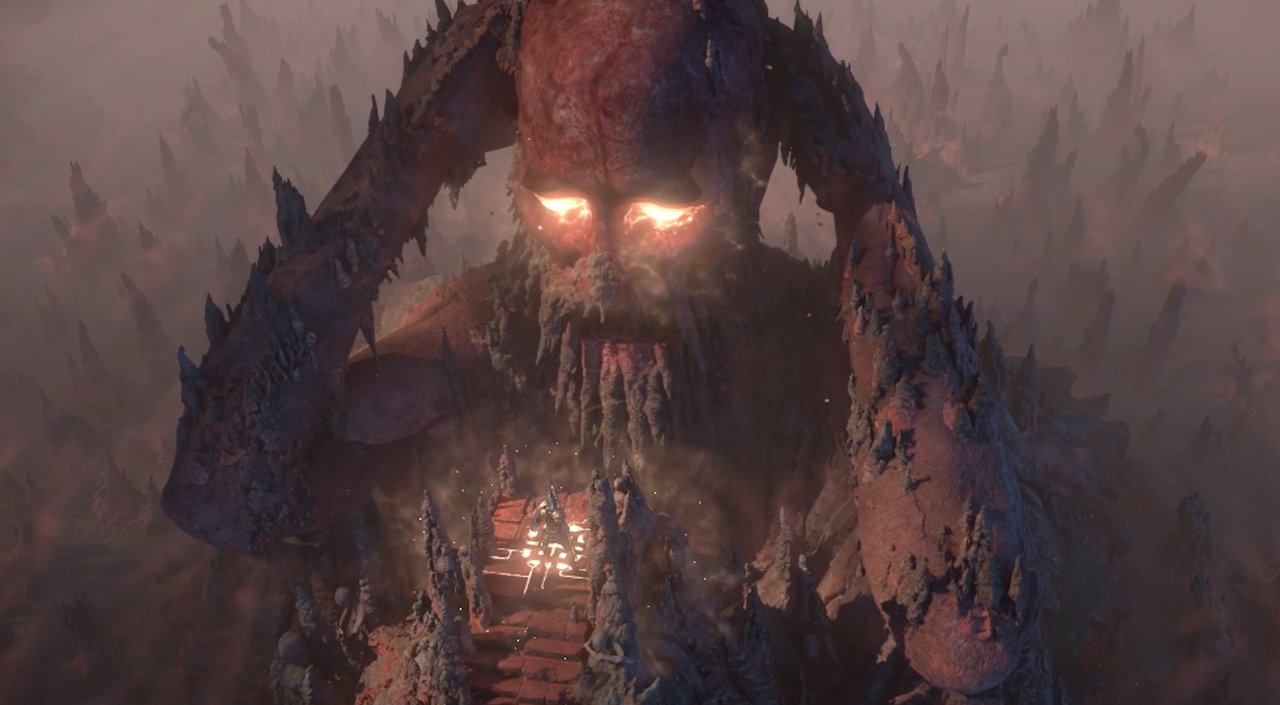 Standing atop a rolling, gothic mini-city dragged through bleak deserts by bizarre beasts of burden, Path of Exile 2’s second act immediately looks like the kind of foreboding, imaginative action RPG adventure I expect from Grinding Gear Games. And that’s not just because of the enhanced graphics compared to its predecessor, with new lighting effects that really pop and set the tone for anything from a scorched sand dune to a properly dreadful dungeon. It’s a nightmarish, gore-soaked, yet oddly beautiful and distinct world that I’m eager to sink my sabatons into.Much like the original Path of Exile, the sequel will start you off as a half-naked wretch sentenced to doom, making your way up from the very, very bottom ranks of the world of Wraeclast. Considering how cosmically over-the-top things got and how many gods we killed in the previous game, the developers very deliberately aimed for this kind of reset. They want Path of Exile 2, which was first announced back in 2019, to be something brand new players can jump into without feeling like they’re missing years and years of context, even though your characters from both games will eventually be able to team up in unified endgame scenarios.

We won’t be able to get our hands on Path of Exile 2 until 2022, but in the meantime, you can check out the brand new trailer showing off a bit of Act 2, and keep reading for insights on what to expect from the long-awaited ARPG sequel.

This doesn’t just apply to the story, either. Grinding Gear Games have put an emphasis on better tutorialization this time around, which I found to be a welcome change given that I probably spent a dozen hours at least poring over Path of Exile wikis and build guides to figure out what I was doing in the original.

There’s an advantage to not doing too much hand-holding.

That being said, they have no intention of doing away with the freedom and complexity that fans of Path of Exile love. I asked about how the original’s skill tree had so many options that it basically gave you enough rope to hang yourself with, making it very possible to fall into some easy traps and end up with a bad build.

“Philosophically, this is a tricky one for us,” said Grinding Gear’s Chris Wilson, “because we think there’s an advantage to not doing too much hand-holding.”

However, he was open to the idea of constraining the options at first for newer players, making more straightforwardly effective choices readily available and unlocking the full, wild potential of the tree down the line. This fits into their larger tutorial philosophy, which is to only offer help if it seems like you need it. Pop-ups will appear if it seems like you’re struggling or not understanding a key mechanic. But Path of Exile veterans who seem like they already know what they’re doing won’t be bothered with them.

One of the most significant changes you’ll see building a character in Path of Exile 2 (and in the original, as many of these basic systems improvements will apply to both) is that gem sockets are now independent of armor pieces. There was nothing more frustrating than getting a new, awesome piece of armor but not being able to use it until you went back to town and rerolled all the gem slots to match what you already had on, as otherwise you’d be breaking your entire build. These are the kinds of changes the devs see as a win-win: they make Path of Exile far more intuitive for new players without removing any of the complexity veterans expect.

Bosses and minibosses will have some new surprises in store to test us too, though. With nearly a decade of updates, I was curious how Grinding Gear has gone about creating a new, seven-act story that isn’t going to feel like we’re walking through variations of the same fights over and over again. One of the main ways Path of Exile 2 will do this is by including bosses that interact with the arena in more interesting ways. One example we saw involved a miniboss who can collapse part of a cave to make rocks fall on you. But the broken parts of the ceiling let light in from outside, so standing in the illuminated areas will prevent the attack from being able to hit you again.

Path of Exile 2’s new weapons also look like a lot of fun to play with, opening up new gameplay styles. We got to see the spear and the crossbow in action, and the spear skills seemed like exactly my kind of mayhem. Equipping it gives you an engage attack that thrusts you into the thick of things, granting a potent damage boost for a short time. When it expires, you can hit disengage to back out of danger and heal up. Thus, you get into a nice tempo of dancing in and out, which seems a lot more fun than some of the more conventional “lawnmower” melee builds that tend to dominate in ARPGs.

The crossbow is unique in that each one comes with an alternate fire skill of some kind. One we saw was a sort of siege mode, which allows you to launch bolts into the air to rain down on the enemy like a one-woman artillery piece. I could see this being very useful if there’s some kind of pesky summoner or healer hiding behind a wave of tanky melee enemies and you just need it gone right away. It’s easy for combat in this genre to become monotonous, especially at higher levels. And it seems Path of Exile 2 is on the right track to combat this with these new mechanics.

Leana Hafer is an avid PC gamer. Talk action-RPGs, strategy games, and more with her on Twitter at @TilFolkvang.

Thanks in part to the Nintendo Gigaleak, the soundtrack for Super Mario World has been restored and gives fans of the classic game...
Read more
Gaming

Marvel's Shang-Chi movie is on its way, with a trailer hitting this week that gave us our first real look at the film.Simu...
Read more
Gaming

Tell Us: What Is Your Biggest Nintendo Prediction for 2021? – IGN

Hey, listen! We love hearing your feedback on Nintendo Voice Chat, and for the first time this year, you have the chance to...
Read more