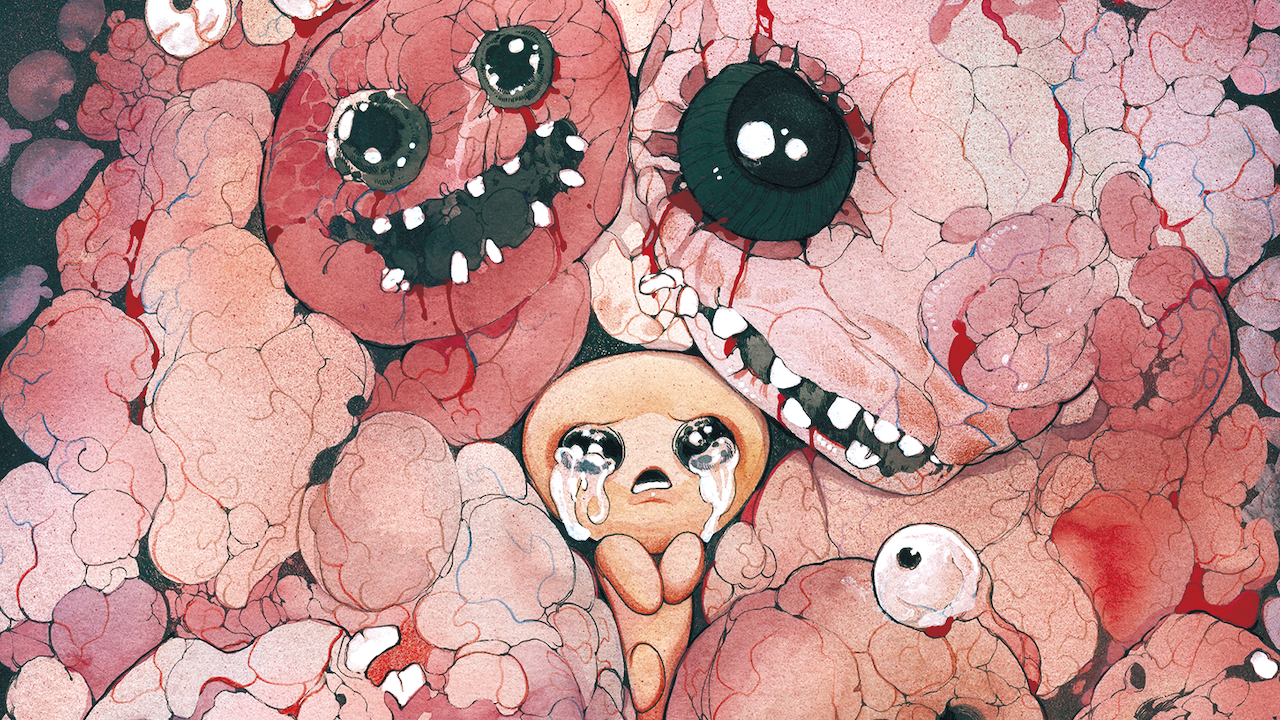 Like The Binding of Isaac itself, creator Edmund McMillen often embraces controlled, successful chaos.He speaks to me over the phone just 34 hours before launching The Binding of Isaac: Repentance last week, in the middle of moving house, with no internet. He tells me stories of throwing together absurd, over-the-top Kickstarter stretch goals for the card game he launched in 2018, The Binding of Isaac: Four Souls, like when they added a tier for backers to get their names engraved on gravestones in McMillen’s backyard. He had to hire befuddled movers to bring the gravestones along to his new place.

In the midst of all this, McMillen is gearing up for even more calculated mayhem. He’s partnered with Maestro Media to launch the first major expansion to Binding of Isaac: Four Souls, called Requiem, on Kickstarter later this summer.According to McMillen, Requiem is almost the size of the original base Four Souls game, and will add numerous cards with references to enemies, items, bosses, and other scenarios from The Binding of Isaac that Four Souls didn’t get to include the first time around. He’s collaborating with comic artists like Sam Keith, Tom Bunk, Alex Pardee, Peach Momoko, and Agnes Garbowski to create art for the game. And yes, he’s including new content from The Binding of Isaac: Repentance.

“I absolutely loved designing this,” McMillen says. “Designing a board game after designing video games for so many years– video games are like the most stupidly complicated art form. Like, literally they’re the most in-depth art form there is. Because you basically take what you do in movies, and then you add game design to it. You add gameplay, game design, game design mechanics… It’s this very long-winded, artistic expressions-type situation where I’ve got to wait four years for somebody to see something that will take them a few hours to beat.

“But with Four Souls, it was literally sitting down with my friends and playing a card game over and over again, and just editing on the fly. I got to design this game with my wife, which I’ve never been able to do. I got to sit down and prototype the game with her.

“I think one of the reasons I started working on it was because I was kind of in a really low spot in video games in general, where I felt like I wasn’t feeling it as much anymore. And I didn’t know what I wanted to do. And working on the card game was a breath of fresh air. And it really got me back in that creative open thinking, like anything is possible.”

McMillen isn’t ready to reveal too much about the specifics of Requiem just yet, especially as he wants to avoid spoiling anything Repentance-related. But he did have a specific idea in mind early on for how he wanted Requiem to impact gameplay.

“The mechanics are more focused on pushing people into situations,” he says. “I found in testing that sometimes people play pretty conservatively. They will just wait it out because they don’t want to cause an issue early on, because they don’t want to be the target of retaliation. Or they don’t want to look like they’re playing favorites by doing favors for different people because then other people will get jealous… And a lot of the cards in this expansion force people to rock the boat. You’re forced to make friends. You’re forced to make enemies. And then there are a bunch of cards that actually allow you to attack other players directly, which wasn’t a mechanic at all in the original game. So it’s like, ‘Let’s rock the boat really hard for you and then give people an option to kill you.'”

Requiem comes a few years after Four Souls Kickstarted its way to immediate, overwhelming success. According to Maestro Media’s Javon Frazier, the over $2.7 million that Four Souls made on the platform in 30 days was “only a fraction” of the revenue done to date,” and over 18,000 people are signed up to hear updates about future expansions to the game. McMillen tells me that it’s gotten so big that the card game has its own fanbase now, distinct from the general Binding of Isaac fanbase. And he’s even hired artists and editors from those fans to help him update old cards in preparation for a re-release of the original Four Souls.

Frazier says there’s a kind of “magic” to the sort of connection McMillen has with the fan community that makes it really enjoyable to make things with him. He’s worked with McMillen for three years now, first as a part of Studio71 on Four Souls, and now as Maestro Media for Requiem.

[The first Kickstarter] felt like a party where we were just trying to have fun and celebrate The Binding of Isaac.

Frazier is excited for the Kickstarter, and says that the goal of running a Kickstarter for this expansion is less about raising funds necessary for the game to exist at all, and more about bringing the community together around the announcement and the fun extras that follow from meeting goals.

McMillen agrees. “When it comes to our Kickstarter, it wasn’t just, ‘Hey, come put some money into funding this game.’ It was more like, ‘Hey, come tell us what you think of these things that I’m sharing with you. And let’s all interact together and have fun.’ It felt like a month-long party where we weren’t so much just trying to make a bunch of money, but we were just trying to have fun and celebrate The Binding of Isaac, and then get hyped about this game that I’d come up with that I wanted everybody to play.

“I think originally Kickstarter really was about somebody who’d had absolutely no money and they had a cool idea and they wanted to do it. And I’d say that that’s not so much what people use it for anymore,” McMillen adds. “It’s still there, obviously, for that. But I think if you look, you’d mostly see like large IP companies that are utilizing it to kind of get a bunch of people in and gauge interest. But I think with ours, it was a communal thing.”

McMillen and Frazier both confirm that weird stretch goals ala the tombstones from last time are on the table again this time, though they expect to come up with them on the fly as needed. McMillen quips that in a way, he’s playing “financial improv,” noting that some of the stretch goals they added during the first Kickstarter did not actually make them any money, even if they did result in cool merchandise or incentives.

I would like to be able to close the book on the video game, so it can be put on the shelf and you can look at it and ask, ‘Was this a classic?’

“I feel like Isaac never got its– it’s become a classic in a lot of people’s eyes. Like, I’ll get people messaging me saying, ‘I played your game when I was eight years old. And now I’m 18 years old. I still play it every day.’ It seems insane. But the thing is, the game has been in development for that long as well. It’s kind of almost like Minecraft in that respect, where we’re updating it constantly. And I would like to be able to close the book on the video game, so it can be put on the shelf and you can look at it and ask, ‘Was this a classic? How do I feel about it? How does it compare five years from now?’ I’d love to do a sequel in the future. But I would also love to do a lot of other stuff.

“I want it to age like fine wine. You’ve got to put it on the shelf and look at it for a little while, and stop adding to it and stop messing with it, so people can just experience and let the legacy lie, you know? And that’s what I want to do for a while before I hop back in. As an artist too, it’s very difficult to not see the potential in what a sequel could be if you start thinking about a sequel while you’re still finishing up the first one. So I want that time to kind of reflect and figure out exactly what I would do with a sequel before I just jump in and make an almost sequel.”McMillen may be ready to walk away from the original Binding of Isaac game, but given his sequel teases, he’s not at all ready to walk away from The Binding of Isaac universe as a whole. And neither is Frazier — who teased other “variations, or other iterations” on The Binding of Isaac coming in the future — suggesting these discussions were critical to what he wanted to do with Maestro Media as a whole.

Ultimately, McMillen believes that the power of The Binding of Isaac realistically lies in the video game’s replayability — therein lies the reason for the game’s ongoing success and ability to generate spin-offs like Four Souls and now Requiem. But he hopes that its popularity has a bit more to it than that.

What I’d like to believe is that I put myself as honestly, and just raw as possible into this.

“What I’d like to believe is that I put myself as honestly, and just raw as possible into this. I feel like The Binding of Isaac’s themes, and mechanics, and the story and everything are the most true to who I am than anything I’ve ever done.

“It’s almost ironic at this point. Because I made The Binding of Isaac as a free game. It was supposed to be a free game in Flash that was supposed to be my break from the structure. I had just gotten off of Super Meat Boy. And even though I didn’t compromise a lot when it came to [Super Meat Boy], I still played it as safe as I possibly could because I invested many years and all of my savings in the project.

“…[But] with The Binding of Isaac, I went unbridled. I wasn’t going to sell it, so what does it matter what I put in it? I can put whatever I want in, and I don’t have to worry about anything and I can just go nuts. And that’s what I did. And I didn’t stop myself from anything I wanted to do. And that’s what came out. And I’d like to think that people can feel that, and that it’s so different than what a lot of other people have to offer.”

What a week! There's so much to discuss on this episode, from Microsoft shockingly doubling the price of Xbox Live Gold only to...
Read more
Gaming

Deathloop originally had a more robust melee combat system, but it was scrapped during development and replaced with the kick move.In a Noclip...
Read more