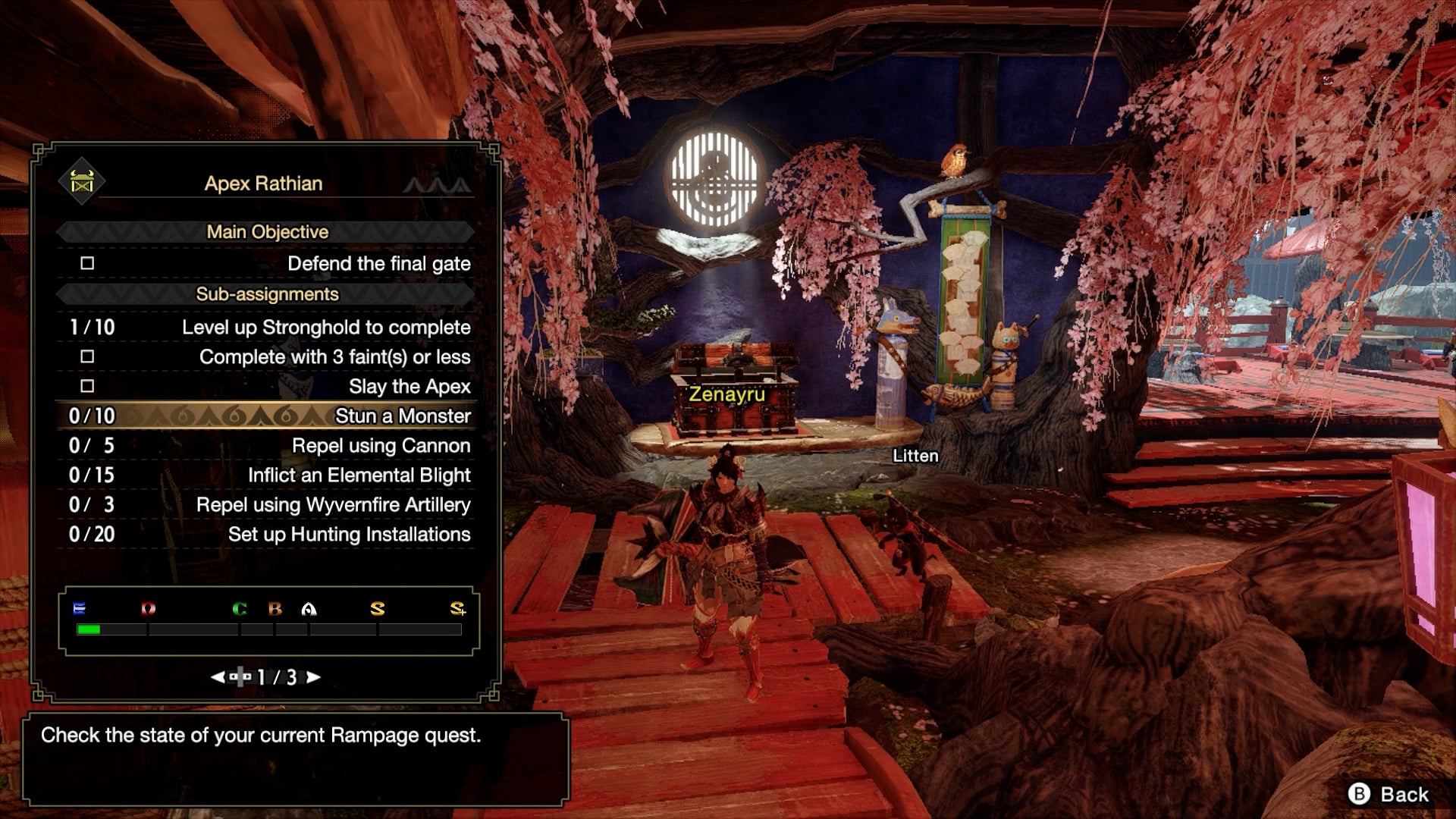 How to Increase Stronghold Level and S Rank Rampages

The key to S+ Ranking Rampage quests is completing sub-assignments. Completing these secondary objectives will help to increase your Stronghold Level throughout the quest, unlocking progressively stronger and better installations, too. Regardless of sub-assignments, repelling as many monsters as possible should be a main goal that consistently adds points to your rank and Stronghold Level. These tasks are indeed easier when in multiplayer.

How to Prep for a Rampage

Check the Sub-Assignments under the mission’s Quest Info to see how heavily they’re weighted in the rank equation – and keep in mind, though Slay the Apex, Complete with 3 Faints or Less, and Defend the Gate are always sub-assignments, the rest change depending on the quest. Now, prep for the sub-assignments before leaving.

There aren’t many sub-assignments you can prepare for in advance, but you can prepare your equipment for the leader of the horde, which is the most dangerous enemy of all. Max Blight Resistance can be useful in general. The Mizutsune Armor set would work well against Apex Mizutsune, and max Poison Resistance is useful against Apex Rathian, which inflicts a powerful Noxious Poison.

As for items, dusts like Life Powder are helpful in group missions, and because a huge range of monsters invade, most curative items could be useful as well as an additional Farcaster to easily travel between areas. Unfortunately, Poison Smoke Bombs don’t work on Rampage monsters.

Bring a Palico instead of a Palamute for its superior support skills. Palicoes can also help with the sub-assignments to Inflict an Elemental Blight and Inflict a Status Ailment. Look for Palicoes that have the Assist or Gathering Type, as these occasionally have skills that inflict Blights, like Shock Tripper, or Ailments like Poison Purr-ison. Though, you can’t entirely rely on your Palico to do the whole job for you.

Note on Blights and Ailments

And as a quick reminder, Blights have “blight” in the name, and need to be inflicted by other monsters, Palicoes, Endemic Life, or special items. Ailments, like Poison, Paralysis, and Sleep, can be inflicted by your own weapons and Palicoes with certain skills. Blight and stun effects can be inflicted with the tools given to you during a Rampage Quest fairly easily, but you’ll definitely want to prepare to inflict Ailments, as options for those are more limited. And, unfortunately, Poison Smoke Bombs don’t work here.

Horde Incoming! Setting Up the Stronghold

At the beginning of a Rampage, and in-between hordes, you’ll have the opportunity to set up Installations. Setting up a certain number of these is often a Sub-Assignment.

Know that removing an installation and then Installing another one counts toward this Sub-Assignment – and you should be doing this often, because removing and reinstalling it doesn’t cost you anything and it refills its HP! If an installation is destroyed by a monster instead, it will take a while before a new one can be built there.

Which Installations to Use

Some Sub-Assignments instruct you to Repel monsters using certain installations. Pay attention to the specific wording of each sub-assignment, as they aren’t always clear about which installations you need to use. If it says “Repel using a Cannon”, you need to use the mountable cannon – not an Auto-Cannon – so be sure to install what you need for the task at hand.

Don’t waste your prep time, either – once you’ve got a Dragonator or Splitting Wyvernshot, which are unlocked at Stronghold Level 3 and 5, respectively, you can reduce their cooldowns at the Power Kilns – and you can just hold A to continuously feed these flames, which reduce the cooldown for everything on the field. If you’re in a group, one of you might want to do this even while fighting monsters, because the Dragonator and Splitting Wyvern shot are just that powerful.

The Dragonbait Warrior attracts monsters to it, and is then destroyed after suffering enough damage from monsters.

If put in the wrong place, do not uninstall a Dragonbait Warrior – this will remove your opportunity to use it. Instead, go to the correct spot and install it there. It will simply move.

Save the limited Dragonbait Warrior and put it right in front of a readied Dragonator when a big horde is incoming to target as many monsters as possible!

It can be used for the Splitting Wyvernshot as well: put a Dragonbait Warrior down in an open area when the Wyvernshot is ready to fire to hit as many monsters as possible.

Comboing these installations is a great way to repel monsters, and even occasionally clear Sub-Assignments. And yes, you have to fully repel monsters for it to count, not just land a hit.

Don’t install the Limited Warriors of Kamura Village in between hordes. These NPC’s generally unleash their first attack at the first sign of a monster, and are only around for a short period of time, so it’s better to wait for a group of monsters to already be present.

Lastly, in some Rampages, you move onto a second area – you’ll know from the quest details – where all installation limits and cooldowns are separate, so don’t feel like you need to save the limited installations for the end. Expect the boss monster to always easily break through the first gate fairly quickly, if there is a second area, so do spend time before the final horde to set that area up, assuming you succeed at keeping them repelled until then. Farcasters are particularly useful for easily moving between the two.

During the Rampage – Installation Tips

Once the monsters arrive, use the manual installations and the tools provided to you to the best of your ability.

Remember you can hold R to guard against attacks while using Installations, which also protects the installation.

Alternatively, press B and a direction to quickly dodge away, which you may want to do when targeted by poison.

The game suggests focusing on the blue-icon monsters (Gate Crashers) that b-line it to the gates, but I like to knock the green-icon monsters (Targeter) out of the air first – they’re a huge pain that target installations. Focus on the red-icon monsters (Stalkers) last, or change your target to whatever is giving your team the most trouble.

When a blue icon appears below a monster’s type icon, that means it’s close to being repelled.

You can easily Stun monsters by aiming a Ballista’s Crag Shot at its head – but keep in mind you can only reliably do this once per monster. Further along in the mission, stunning a monster may require two crag shots to the head, but by then you should have unlocked the upgrade to shoot two Crag Shots before initiating a cooldown.

Use the Retreat Shot to push back a monster. Good to use on a monster wailing on a gate, or on one that won’t stop attacking you.

Inflict Thunderblight on a massive number of monsters at once with a Cannon’s Thunder Shot, which you can charge by holding down Y while continuing to shoot the normal cannons. Thunderblight has the added bonus of making it easier to stun monsters, too!

Hold the X button to charge a Piercing Shot, which will move through all monsters in a line, dealing damage to all. You can also charge this while launching normal cannons.

Usually, install Bamboo Bombs up front and in-between hordes to get damage done immediately to incoming hordes on the floor. However, when this is a sub-assignment, install them next to monsters on their last breath (indicated by a blue icon below their type icon) to ensure a Bamboo Bomb is the final blow.

Aim Wyvernfire Artillery installations after setting them by mounting them for a short moment. If a monster comes in contact with the red laser, they’ll get hit! Align them to cross the path of a high-trafficked area, like right before a gate.

These Auto Installations can also inflict Fireblight, which deals damage over time and causes monsters to flinch more easily.

Inflicting the same blight twice on one monster is difficult (unless it’s the boss), but luckily picking up the materials Monsters drop solves that. Some of the shiny objects dropped by monsters are elemental Barrel Bombs, which inflict blight on contact. You can also pick up Explosive Kunai, which deal a fair amount of damage.

Plant those elemental Barrel Bombs within a mass of monsters, and detonate it with a fearless attack or a kunai to affect as many monsters as possible. Of course, you can always set them next to Bamboo Bombs – but it’s easier to guarantee a multihit if you’re willing to get down and dirty. Or, use the Wirebug Dash and press Y with the bomb ready on your item bar to throw it down below you.

Most of the villagers do massive damage to the monsters around them at quite a long range, and we already suggested waiting to install these when there is already a group of monsters present, but know that Master Utsushi makes the surrounding monsters rideable. Wyvern Riding is another great opportunity to try to inflict ailments or blights, like with a Pukei-Pukei’s poison or Mizutsune’s waterblight (usually by performing a Mounted Punisher), so choose wisely after initiation Master Utsushi.

Counter Signal – What Does it Do?

The Counter Gong installation is what creates a Counter Signal. When activated, hat’s your queue to drop everything and repel monsters up-close and personally, as your weapons will do massive bonus damage.

Do not destroy a Counter Gong – you will not be able to rebuild it.

How strong the Counter Signal buffs your party is dependent on the level of your Stronghold.

Cyberpunk 2077 developer CD Projekt Red has issued a statement regarding reports of a seizure-inducing sequence being included in the upcoming role-playing game. Thank...
Read more
Gaming

Remedy more than doubled its operating profit in 2020, achieving a record financial year despite releasing no games.According to the company’s latest financial...
Read more
Gaming

Last Edited: 1 May 2021 12:03 pmThis time around, the game will feature a full campaign, told from the perspective of soldier Jack...
Read more