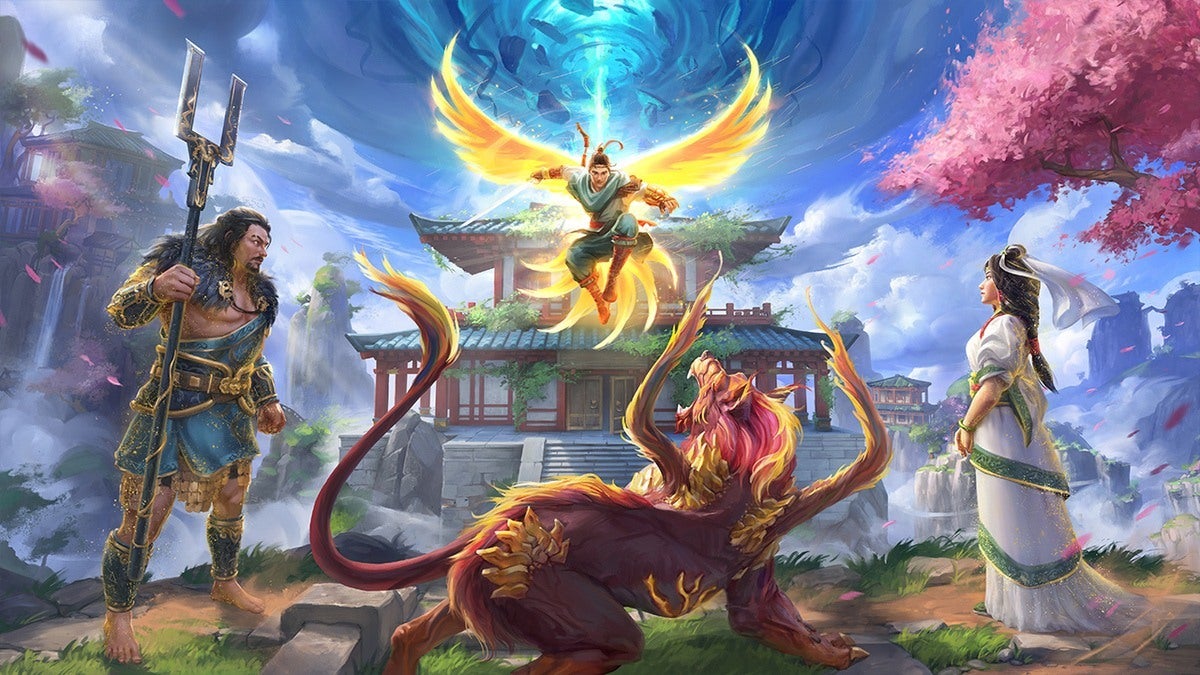 If you enjoyed Immortals Fenyx Rising and are excited at the idea that this second slice of DLC will take you to an all-new location with an all-new protagonist, well, better check that enthusiasm at the door. Myths of the Eastern Realm does indeed feature a different location and protagonist, but “new” would be a long way down the list of words I’d use to describe it. This six to eight-hour adventure is cut from the same exact cloth as its parent game – albeit with a slightly different pattern, and the result feels overly familiar with little to set it apart.

As the title suggests, Myths of the Eastern Realm is inspired by Chinese mythology and introduces us to a world that has been torn asunder, the balance between Heaven and Earth shattered and all the humans turned to clay. A mortal named Ku (male only, there’s no female option) somehow survives and seeks out the aid of the Goddess Nuwa, the original creator of all living things, in hopes that the damage can be undone. The setup may sound epic, but sadly, it doesn’t ever really deliver.

Myths of the Eastern Realm certainly makes a strong visual impression, however, thanks to its richly detailed world and the varied topography of its new map. Peering out from one of the many high vantage points typically reveals temples and pagodas perched atop rocky cliffs, waterfalls splashing down to feed snaking rivers and green plains giving way to bamboo forests or flowering groves. And when an impossibly large moon rises on a misty night, shining ethereal light down on an already gorgeous landscape, I invariably took some time to drink it all in.

Myths of the Eastern Realm’s world has been torn asunder, the balance between Heaven and Earth shattered and all the humans turned to clay.

The aesthetics fit the theme well then, but from a functional perspective, getting around, fighting enemies, collecting resources, and completing objectives feels exactly the same as it did in Fenyx’s adventure: still good, but nothing to get excited about or to reinvigorate the gameplay after the 30 hours we spent with this foundation last year. Ku has the same climbing and gliding ability set, and the same implementation of Far Sight to tag puzzles, objectives and collectibles in the terrain. This expansion’s map is pocked with enemy camps, challenges, and upgrade materials, and they’re all functionally identical to those of the Golden Isle. Ku’s weapons, armour, stamina and health are all upgraded in the same way too, sometimes with extremely familiar animations, while gathering ingredients to turn into potions is identical. Well, aside from the fact that you’re collecting peaches instead of pomegranates.

Sure, you may no longer be venturing into the underworld via Vaults of Tartaros, and instead ascending to ruined temples that float amidst blue skies, but the differences are superficial. Instead of solving puzzles with moving platforms you now solve puzzles with moving clouds. And instead of receiving a shard of Zeus’ Lightning to upgrade your stamina at the end of a vault you get Sky Agate at the end of a Heavenly Ruin. It also upgrades your stamina.

Even the enemies occupy the same roles, whether you’re talking about the chimeric Fei, which have tagged in for the Gorgons, or the winged beasts, which might as well be Harpies for all the difference it made. And then there are the many variants of ethereal soldiers, some of which teleport about and some of which have shields that have to be crashed through with heavy axe attacks, just like they did throughout Fenyx Rising.

And sure, the Constellation puzzles from Immortals’ main game may now be called Bagua puzzles, but it’s the exact same thing with the same reward, and invariably involve well-worn staples like moving crates around to weigh down pressure switches. With so much of it feeling so similar, I was pleased to find a couple of new wrinkles in Eastern Realm’s puzzle design, such as crates that can be flipped between small and large, and areas in which Ku’s stamina is drained and you’re forced to work around that limitation, but these are hardly game changers. Most of my criticisms of the puzzle designs in the base game remain here. These puzzles are fine, but they’re not fresh or inspiring.

Of course, Immortals Fenyx Rising offset some of its workmanlike puzzle design with the force of its personality. The double act narration from Zeus and Prometheus laid the groundwork for the story to not take itself too seriously, while the supporting cast of gods piled on to hammer home the point that Greek mythology is like one big cosmic soap opera. Even the big bad, Typhon, interjected theatrically to ensure we were kept in tune with the larger threat.

Ku is a likeable enough protagonist and is written with some levity, but I didn’t find much to latch onto in the story…

It was fun and – for the most part – engaging, and I miss that here. Myths of the Eastern Realm is much more pared back and all the worse for it. Ku is a likeable enough protagonist and is written with some levity, but I didn’t find much to latch onto in the story, and the characters simply aren’t strong enough to bolster it. Take Goddess Nuwa, for instance: Her role is essentially to mollycoddle Ku; to try and stop him from doing anything and then to scold him when he successfully did that thing she told him not to do. It’s hardly riveting stuff and absolutely not my idea of video game escapism.

From a gameplay perspective, Ku hits the ground running in Myths of the Eastern Realm. Unlike Fenyx, he starts his adventure with almost all his skills upgraded – he can string dodges together, launch enemies, slow time while firing his bow in mid-air, parry into counters, sprint attack, and more. It makes sense to do this given everybody will be coming from a close to fully upgraded Fenyx, but it is a shame that there aren’t new additions to these skill trees to vary the gameplay and make Ku play like a different character.

The one effort that Myths of the Easter Realm makes to differentiate itself is the new God Seals system, which is an on-screen indicator that ascends through three tiers as Ku fights, making his attacks faster and more aggressive and opening up super-charged versions of two of his Godly Powers: Blades of Huang Di and Axe of Yan Di. Immortals players will recognise these as Ares’s Wrath and Hephaistos’s Hammer, respectively, but this time they have unique upgrades to unlock. Despite this, the role they play in combat is essentially the same, and they’re joined by Fenyx’s other Godly Powers, all of which are functionally the same but with new names, and all of which are fully upgraded out of the gate and thus never change.

I understand that actually building out new skill trees and Godly Powers is perhaps beyond the scope of this piece of DLC, but what does a palette-swapped, smaller version of a game I’ve already played really add?

Nobody Saves the World Is a Hilarious, Surprisingly Deep Action-RPG from Guacamelee Devs – IGN

There’s no shortage of RPG’s that travel in wish-fulfillment tropes, letting players take on the roles of some fantastical chosen one on a...
Read more
Gaming

Nintendo has announced Game Builder Garage, a new game that will let you "learn to make games from the minds at Nintendo." Its...
Read more
Gaming

The chip shortage currently affecting all parts of gaming is not likely to let up until the end of next year, according to...
Read more