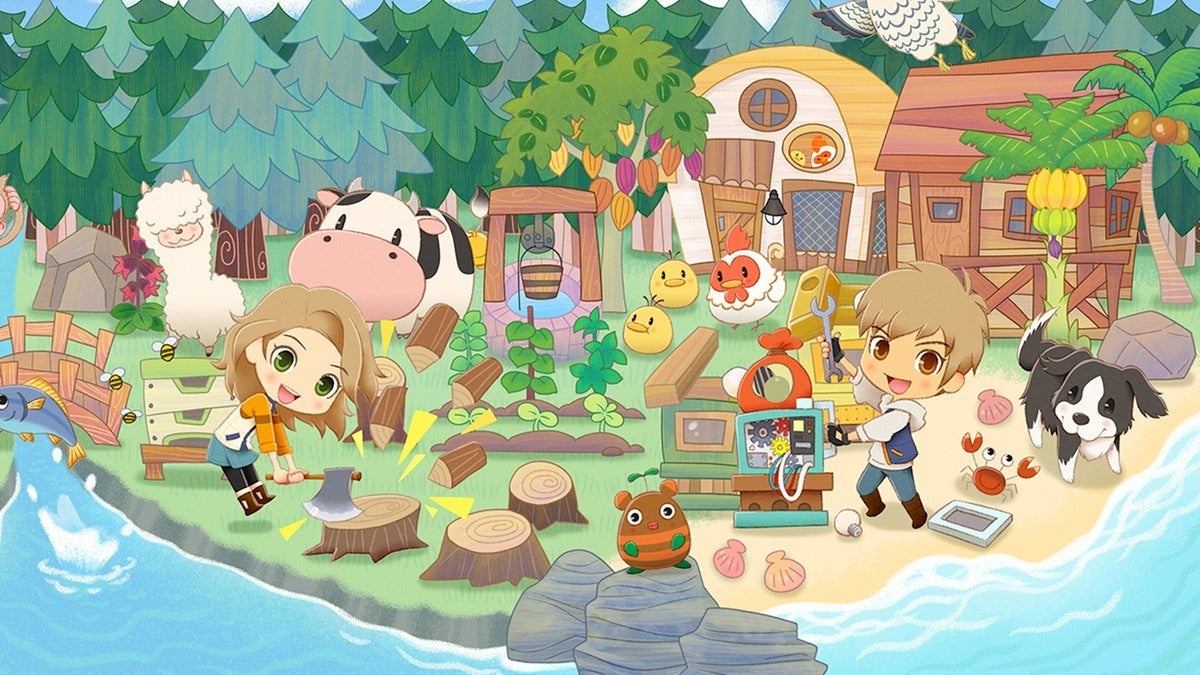 Anyone who has played a Story of Seasons game before knows the plot of Pioneers of Olive Town: an enterprising young 20-something escapes the bustle of city life and takes over their grandfather’s old, dilapidated farm outside of a small, rural village that’s struggling to keep its inhabitants entertained. To turn things around you grow crops, raise animals, talk to the townsfolk, and repeat. Pioneers of Olive Town isn’t trying to change that, but it adds a huge amount of land to manage and crafting mechanics to work with, and that fleshes out that familiar loop into a full, pleasant take. For those of us who have been playing Stardew Valley non-stop for the last five years, it’s a much-needed refresh.Pioneers of Olive Town is stuffed with things to do, and while the seasons pass rather slowly, I was surprised at how much I was packing into a day – as well as how much more I still wanted to do at the end of each one. At any given point you’re working toward rebuilding a structure, clearing a new segment of land, planning another excursion into one of multiple mines, saving for the purchase of a new tool upgrade, trying to finish a quest to develop the town, and trying to get the cute girl who works at the museum to come take a walk on the beach with you. It’s pretty standard stuff for the most part.The most dramatic differences separating Olive Town and prior Story of Seasons games are the materials and crafting systems, and the sheer scope of the farmland you have to clear. The former borrows heavily from (surprise!) Stardew Valley, teaching you new crafting recipes as you level up various skills like mining, fishing, and logging. This includes a number of recipes for machines that will convert materials into other materials, such as wood into lumber or ore into bars.
It’s a hassle to have to fuss with machines instead of all the other, far more fun bits, like exploring the enormous farm I’d inherited.

But there are simply too many of these! Some of them even perform very similar functions, like the Maker machines that convert thread into cloth but then entirely separate ones to turn wool into, well, different cloth. Or the separate machines for converting rice and beans into powders, converting herbs into seasonings, and salt and pepper into spices. I could have done without, like, half of these machines, especially since by the time I was a few seasons in, half my farm looked like an industrial district between all the machines I had running at once and all the storage boxes I had to set up to keep all their products organized for when I would inevitably need them to build something. Story of Seasons would be much improved if growing your farm didn’t necessitate something like a fourth of each in-game day playing an entirely different management sim instead of the actual farming sim I wanted to play.

It’s a hassle to have to fuss with machines instead of all the other, far more fun bits, like exploring the enormous farm I’d inherited. As with prior games in the series, Story of Seasons starts you with a small, overgrown bit of land that you will slowly clear of trees, rocks, and grass with tools like an axe, a hammer, and a scythe. You’ll also repair dilapidated structures, like a chicken coop, using the materials you get from clearing the land (and, later, from running those materials through like 20 different machines). Early on, the stretch of land you start with seems like plenty to deal with and certainly enough space to farm in.

Then, you’ll repair the bridge.

Crossing the bridge to the southwest of your farm reveals a plot of land twice as big, equally overgrown, and with new run-down structures of its own to repair. And there are even more sections of land beyond that. Look, the farm is just huge, okay? By the time you repair the horse stable, you’ll need the horse to get you back and forth across the stretches to do your daily chores. That means plenty of space to build and grow whatever you want, including crafting ridiculous decorations like, I kid you not, a giant topiary cow.

The size does unfortunately make it obvious that Story of Seasons is struggling to run at a steady framerate, especially when you’re running across an area with a lot of things on screen. And the farm’s scale can become time-consuming later on because puddles, weeds, and trees grow back quickly. If you want to keep the land clear, you’ll be spending a lot of time running over your entire farm hammering down unwanted sprouts. The worst offenders are puddles and even larger ponds, which appear in abundance each time it rains and require repeated, tedious use of a bucket to drain if you want your space back.

There’s clearly been a lot of love put into both the original writing and the localization of some of these scenes, as well as a willingness to be goofy

But the size mostly works in its favor, as you’ll need all that space for your hundred or so converter machines, but also for crop growing and animal grazing. And it’s just fun to explore these new areas too, because each new section you unlock includes new forageable items, new materials for building, new buildings to remodel. Plus, each season brings new adorable roaming animals that you can eventually tame and add to your barn and coop. A highlight of my entire playthrough was unlocking new areas, discovering the embarrassment of riches waiting for me within, and delighting even seasons later in new roaming animals like a goofy brown cow and the dumbest, cutest-looking rabbit I’ve ever seen, ready to be tamed.

It’s a good thing the days in Pioneers of Olive Town are long, because tending to your farm is only half the job and there really is just piles to do each day. Olive Town itself is sizable and will grow with new shops and activities as you complete quests for the town’s mayor. For example, you’ll unlock a salon with a wide array of customization options that will grow even more over time. Delightfully, all options are available to every character, regardless of your gender selection.

Olive Town’s residents may not seem like much when you initially speak to them. Most of them will make similar comments about whatever event is nearest on the calendar – so, anticipating the Pet Derby for a few days, then discussing the results of the Pet Derby for the next several days after. It’s unfortunate that the everyday dialogue is so bland, because the cutscenes are where characters really get to shine. There’s clearly been a lot of love put into both the original writing and the localization of some of these scenes, as well as a willingness to lean in and be goofy and tongue-in-cheek on the regular.The solid writing extends to the cast of five bachelors and bachelorettes, all of whom have numerous charming interactions with you as you increase their affection toward you with gifts and conversation. The bachelorettes are a bit more diverse in appearances and personalities than the bachelors, but the good news is that if the gents aren’t wooing you effectively you can date the women just as easily, regardless of which gender you’re playing as. Thank the Harvest Goddess that Marvelous did away with “friendship ceremonies” after the remake of Friends of Mineral Town made being as gay as you like a standard for the series.

Tenchu: Stealth Assassins creator and president of Acquire, Takuma Endo has said that he would like to create a new Tenchu game for...
Read more
Gaming

Cyberpunk 2077 has sold extremely well already, but those playing the game on their original PS4s and Xbox Ones have been reporting major...
Read more
Gaming