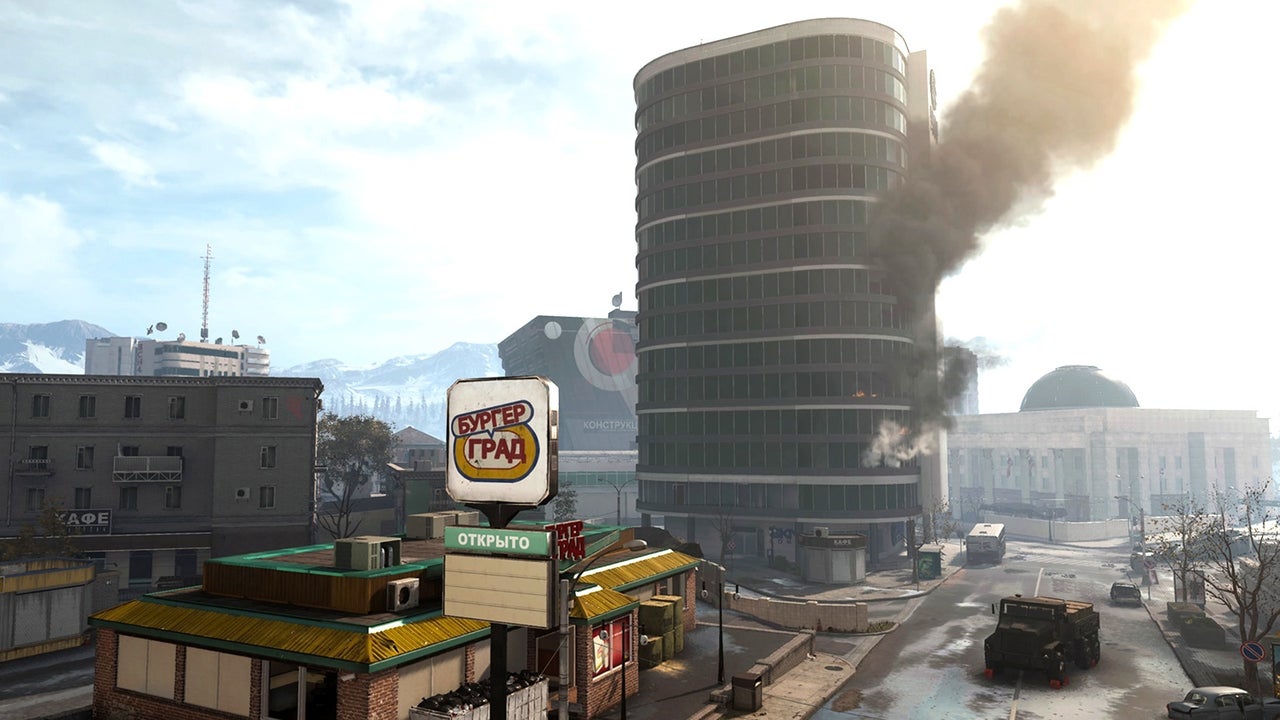 Don’t get me wrong, I like running around Verdansk, popping a Dead Silence and getting stuck in as much as the next person. But sometimes you just want to chill out with friends and have a chat on a rooftop while occasionally sniping nearby enemies.But which rooftops are the best? With the current Call of Duty Warzone map rumoured to change substantially or be replaced completely, I felt it was time to make the definitive list. A love letter, if you will, to the many hours I’ve spent hanging out with friends on the beautiful roofs of Verdansk.

Watch the video above, click through the gallery below, or scroll down the page for the full list!

We start our tour at the Bloc 6 Tenement Block, whose ravishing, red roof punctuates a skyline largely painted with browns and greys. Sandwiched between Stadium and TV Station, it offers a great vantage point to pick off squads pushing from either side.

The downside is the lack of protection it offers. Getting the best vantage point leaves you pretty open and the small balconies are prone to airstrikes. In the event of this happening you can always hop down the ladder and hide in one of the apartments, redecorating the walls with sprays while the bombs drop. To quote Oscar Wilde, “My wallpaper and I are fighting a duel to the death. One or the other of us has to go.”

Offering panoramic views across the whole of southern Verdansk, the tallest roof of Hospital can be a strong position to hold, but isn’t without its issues. The smoke billowing from the side of the building is not only a health risk, but can obscure the perfect snipe.

It’s also one of the more accessible roofs in Warzone, meaning it’s easy to take by riding the exterior zipline, via the interior elevators or by flying a chopper onto the roof and scattering opponents with an airstrike. These entry points, coupled with the ladders leading to the top section of the roof, make it less of a great spot to chill with friends, but a fantastic one if you’re looking for action.

Hotel Volodymyr is a great place to catch stragglers heading into the city centre from either Stadium or TV Station. Aesthetically it’s not much to shout about, but just below the roof is a surprisingly nice bar, complete with pool table and swanky (by Verdansk standards) leather furnishings.

But we aren’t here to rank bars, and the reason this Hotel isn’t further up the list is, despite its prime location, you feel quite vulnerable. Other roofs in Downtown have a clear line of sight on Hotel Volodymyr, and there’s more than one way to reach the roof. These stairway access points don’t have doors, which is definitely a safety risk, plus there’s a zipline coming all the way up from the ground, which can easily take you by surprise.

The Torsk Bloc Twin Apartments are perhaps the tallest buildings in all of Western Verdansk and therefore usually hotly contested. If you’re able to claim one of these pieces of real estate early then you’re in for a good time. Personally I prefer the northern one as there’s more area of opportunity for a good snipe.

Make sure you have a good short range weapon as some nasty people will inevitably try to take this view from you. It’s also important to keep your head on a swivel as a firefight may well occur with a squad on the opposite roof. These can be long, drawn out affairs leading to each team downing the other a dozen times, but neither actually wiping them out completely, and that frankly ruins a nice afternoon taking in the sights of Verdansk with your friends.

You took my sadness out of context at the Graveyard Apartment Complex. One for the Lana Del Rey fans there. Anyway, there is a genuine reason to be sad about this particular roof because it’s so close to being great. Its short walls barely reach past your knees, and if it wasn’t for this lack of cover this really would be a cracker. As it is, it, um, just falls short.

Still, it provides great opportunities to rain fire down upon Boneyard, Storage Town and anyone sitting on top of the swimming pool, which is a fairly amateur choice of roof if you ask me. Just see anyone glinting you from either of the aforementioned Twins though and you’ll be wishing that big painted SOS actually had a use.

The sprawling roof of Verdansk Airport’s main terminal is a unique beast. Once inaccessible without parachute or helicopter, it isn’t the fortress it once was before the introduction of ziplines, but it still has its perks. While not the tallest roof, it does provide a full overlook of the airport’s vast runway and the opportunity for fun snipe-offs with squads holed-up in Control Tower.

With plenty of generators to use as cover, it’s one of the safest spots to be and a great place to call in loadouts full of HDRs, SPRs and Kar98s. However, the noise from the generators, combined with the heavy clanging of footsteps on steel and the shriek of jets above, means it isn’t the best place for a quiet catch-up with mates.

Now we’re entering elite roof territory. Promenade East is an area full of buildings, but one stands clear above the rest. This welcoming brown cube is one of the more fun roofs to take control off and a well-coordinated push utilising its dual ziplines, stairwell or helicopter often leads to a successful capture. On the flip-side, it can make it one of the more challenging rooftops to keep for yourselves.

Ward off any threats and you’ll be in a great position to control a lot of the traffic between Hospital and Train Station. Also, it’s a cube. Look at it, that’s just pleasing on the eye.

“Big Green”. “Big and Tall”. “Tallest Building”. We all have a name for the giant glass cylinder that towers over Downtown Verdansk. Unmatched for height, the SKN Broadcast tower is a sniper’s paradise, allowing for a 360-degree view of almost half of the map. Targets can be found at all distances, even as far as Prison if you’re feeling lucky.

Peering over the edge with a glinting scope makes you an obvious target, but I think snipers on the ground are more afraid of me than I am of them. Stick a proximity mine on the single winch and another on the stairwell to watch the world go by in peace. Just don’t sit too close to that noisy air-conditioning unit if you want to hear clearly.

A rare trip to the northern reaches of Verdansk brings us to Lozoff Pass and its nearby frozen lake. This Tenement Block is the only tall building of note in the area and therefore often becomes a hotbed of activity. If the circle is heading anywhere in the top half of the map then it’s a good bet one squad will call it home, so why not make it you?

Aside from stunning views and ample sniping opportunities, this roof possesses one unique factor very few others can compete with – a lack of ziplines. This gives the player a rare sense of calm when perched up here, knowing that the only way up is via one of the two staircases at either end. As long as you keep your wits about you and don’t become the filling in a MAC-10 and MP5 sandwich then you’ll be laughing all the way to first place (maybe).

Sometimes you open a door, feel the fresh gas-filled air of Verdansk hit your face and think to yourself: “wow, what a roof”. The Art District Hotel is beautifully positioned in Downtown Verdansk, where targets can be easily acquired whichever direction you turn. Most of Downtown is visible, plus a full view of Stadium, Port and anyone daring to cross over from Farmland with very little cover to help them.

There’s just enough tall brickwork and generator cover to be able to sit in peace and have a chat while the war takes place all around, plus the single zipline and staircase entry points are relatively easy to defend compared to the majority of other roofs. It’s also one of the more visually appealing buildings of Verdansk, dressing its 15 floors in cream and mahogany stone, with glass panels and windows liberally installed. All in all, what a roof.

So that’s what I think are the best roofs in Verdansk, a list we’ve been waiting for for far too long. If there are any you think I’ve criminally underrated then please let me know in the comments. Or if you just want to have a go at me for encouraging camping in Warzone then feel free to do that too.

Last Edited: 9 May 2021 10:38 pm Listed below is a complete guide to unlocking all branching routes across the fifteen different courses in...
Read more
Gaming

Before We BeginBefore getting into the level, we have a few notes to make. First, Ashley, Kaidan and Tali all have unique dialogue...
Read more