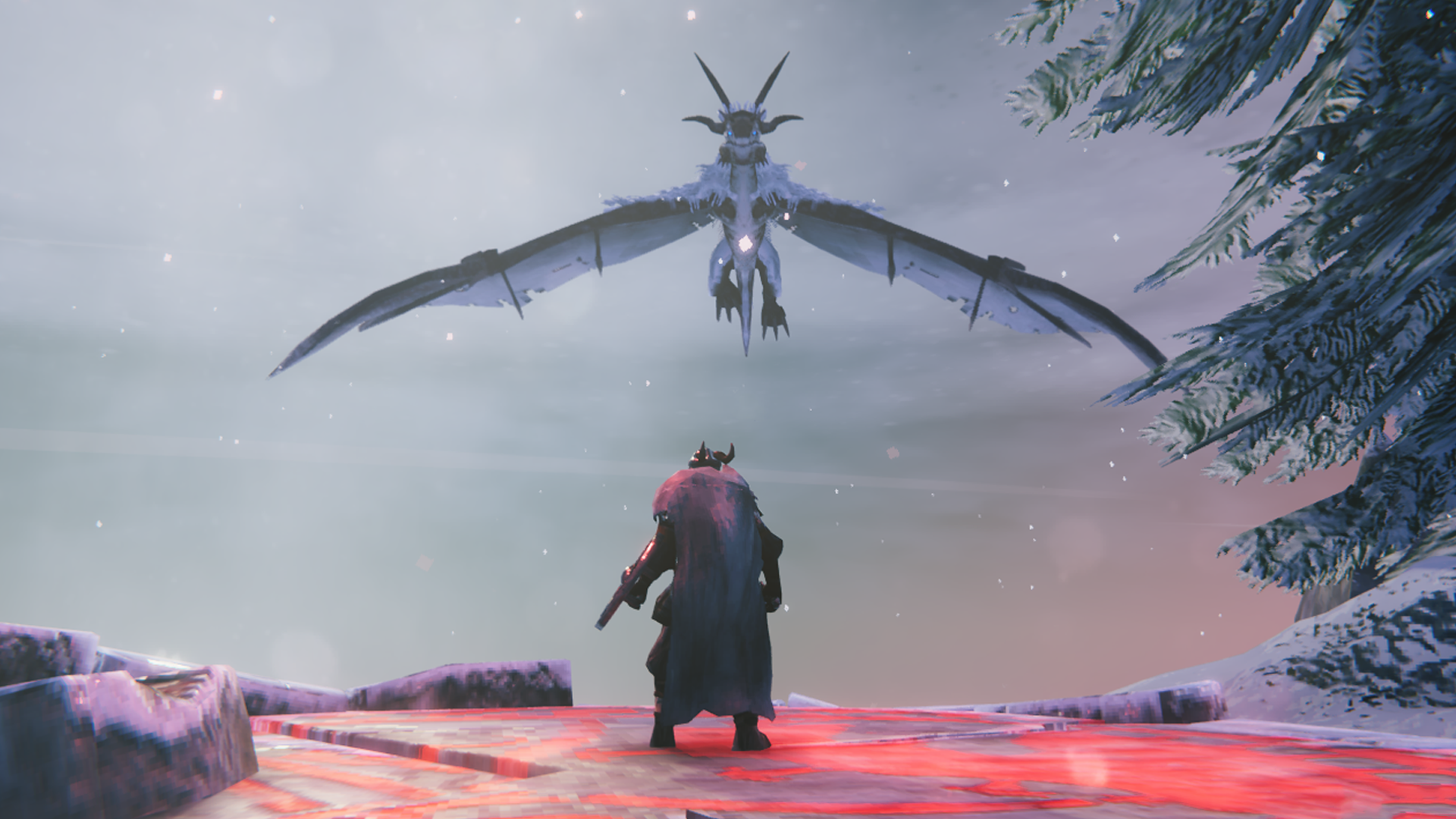 How to Summon Moder

In order to summon Moder, you’ll need to first find its ritual site on your map. To do this, head to the Mountains biome and begin exploring.

Step One: Prepare For The Cold

The mountains are a dangerous place. It’s freezing cold and full of enemies that can quickly take out chunks of your health like wolves, Drakes, and Stone Golems.

Before venturing into the mountains, make sure you have warm clothing and plenty of Frost Resistance mead. Be sure to check out our guide below for more detailed information:

After you’re properly geared up, it’s time to track down the Vegvisir runestone. As you explore the mountains, you’ll come across large stone structures. Many of these are populated by skeletons and generally have treasure chests with valuable loot.

However, some of these stone structures will contain Draugrs. Once you find one with Draugrs, you’ll want to dispatch the dangerous enemies. Afterwards, head inside and you should find a Vegvisir Runestone. Interact with it to mark Moder’s location on your map. Grab any nearby loot, too.

Using the information you gained from the Vegvisir Runestone, head to the new area marked on your map. It will be located in a Mountains biome, and may require some long distance traveling.

Once you arrive, you’ll find a large circular rune on the ground with a sacrificial table near the back.

Reading the rune tells you to “SACRIFICE HER SPAWN”

Near the back of the ritual site you’ll observe three concave holes that are the perfect size for some Dragon Eggs to fit. Time to track down some eggs.

The next step is to gather Dragon Eggs to sacrifice. These can be found in the various nests throughout the mountains biome. They are generally guarded by one or two Drakes, so be sure to take those enemies out when you arrive.

Also, these eggs are extremely heavy. Each one weighs 200 pounds and can’t be transported through a portal. You’ll likely be trekking far across the dangerous mountains with each egg in tow, so it’s recommended to have some friends protect you (or help carry an egg themselves).

Bring each Dragon Egg back to Moder’s ritual site and deposit each one into the holes behind the altar.

Once you’ve found three Dragon Eggs and dropped them into the respective holes, you’re ready to summon Moder. Before you offer the sacrifice, though, make sure to prepare for the upcoming battle.

Before you take on Moder, make sure you’ve got your best gear. Bring some friends to help, too, if possible.

For this boss, you’ll want a full set of Wolf Armor as it provides Frost resistance, which is key during this frigid fight. As far as weapons go, bring a melee weapon like an Iron or Silver Sword and a good bow such as a Huntsman Bow or Draugr Fang.

You’ll also want to stock up (and we mean stock up) on plenty of arrows, as much of this fight takes place in the sky. Craft the most powerful arrows possible, but ideally arrows that provide damage over time are helpful such as Fire Arrows or Needle Arrows.

Check out our gear guides below for recipes needed to craft the best possible gear for this encounter:

Make sure to bring plenty of food as well as Stamina and Health mead drinks, plus Frost Resistance mead to keep protected from the cold if you don’t have Wolf Armor.

It’s also a good idea to build a set of portals to easily get back to the arena and grab your dropped gear if you’re not successful. Alternatively, you can build a home (complete with a bed) in the mountains somewhere close by to set your new spawn point upon death.

How to Defeat Moder

Moder is another challenging fight that will test your archery skills as well as your melee abilities. Upon summoning Moder, she will take to the sky above you.

This fight plays out in two phases that alternate continuously until you bring her down. The first phase is Moder flying around in the sky, while the other sees her touch down on the ground for some up-close combat.

When Moder is airborne, she will attack by sending shards of ice towards you that explode on the ground and create frozen stalagmites all over the battlefield.

If you are hit by these icy projectiles, you’ll take frost damage and become slowed for a few seconds. Thankfully, each projectile telegraphs its path from the moment Moder launches it to the time it hits the ground. So, you can run across the battlefield or dodge roll out of the way to avoid each one.

The ice will remain on the ground as an obstacle to hinder your movement, so it’s best to break these with a weapon if possible. Otherwise, you’ll quickly find yourself overwhelmed with nowhere to run as Moder continues to rain down ice from above.

These ice shards hit hard, too, so make sure you don’t accidentally get hit by them. They can also quickly destroy the environment around you including nearby rocks and trees. Be wary of your inventory weight as you’ll likely pick up stone and wood unintentionally as you move around the battlefield which can quickly weigh you down and cause you to move very slowly.

While Moder is flying around, equip your bow and begin firing arrows at her. It’s best to use Fire Arrows, Needle Arrows, or some other arrows that cause damage over time as this additional damage adds up and can help you take down Moder more quickly.

The key while Moder is airborne is to continue moving around the battlefield and avoiding the ice shard attack while hitting her with as many arrows as your stamina will allow.

After some time, Moder will descend and land on the ground. This is your chance to get up close and personal with the dragon queen.

If you’re confident in your dodge roll abilities and melee combat, you can approach Moder and begin hacking away at her wings and head.

While on the ground, Moder will swipe at you with her wings. These attacks are telegraphed well and you can dodge roll out of the way, while landing a couple hits on the wing afterwards.

Moder will also bite you after rearing her head back momentarily. Dodge out of the way or block this attack with your shield and continue slashing at her head for more damage.

The last attack you’ll want to watch out for when she’s on the ground is her frost breath attack. She will rear her head back and expel a wide cone of ice that will damage and freeze you if hit, slowing your movement significantly. As with her other ground moves, dodge roll out of the way and you can get a few hits in while the animation finishes.

If you’d rather take Moder down from a distance, that’s fine as well. The battle may take longer as arrows don’t do as much damage, but if you consistently land head shots, you can take decent chunks of health away each time she’s grounded.

After some time on the ground, Moder will lift off and begin flying around again. Switch back to your bow if it’s not already equipped and begin the barrage of arrows once more, while continuing to dodge her ice shard attack.

It’s also important not to let Moder fly too far away from the battlefield or the fight will end and she will heal back to full health.

While running around the battlefield, be sure to watch out for other enemies such as wolves, Drakes, and Stone Golems who will occasionally wander into the fight.

Focus on taking these enemies down immediately while keeping an eye on Moder’s location.

This fight requires plenty of patience and plenty of arrows. Continue alternating your battle strategy depending on whether Moder is airborne or on the ground.

Keep an eye on your health and stamina and drink mead as needed. Also be sure to keep your Frost resistance up so you’re not taking additional unnecessary damage.

Eventually, you’ll take down the dragon queen and be rewarded with 10 Dragon tears and Moder’s trophy.

Dragon tears are required to craft the Artisan Table, which gives you access to the Windmill to make Barley flour and the Spinning Wheel to make linen thread.

Don’t forget to hang Moder’s trophy back at the Forsaken Altars! Activating Moder’s Forsaken Power which gives you permanent tailwind when sailing.

The Last of Us Part 2, Tell Me Why Tie for Outstanding Video Game at GLAAD Media Awards – IGN

Larian Studios has announced that the Druid class will be added to Baldur’s Gate 3 as part of the early access game’s Patch...
Read more