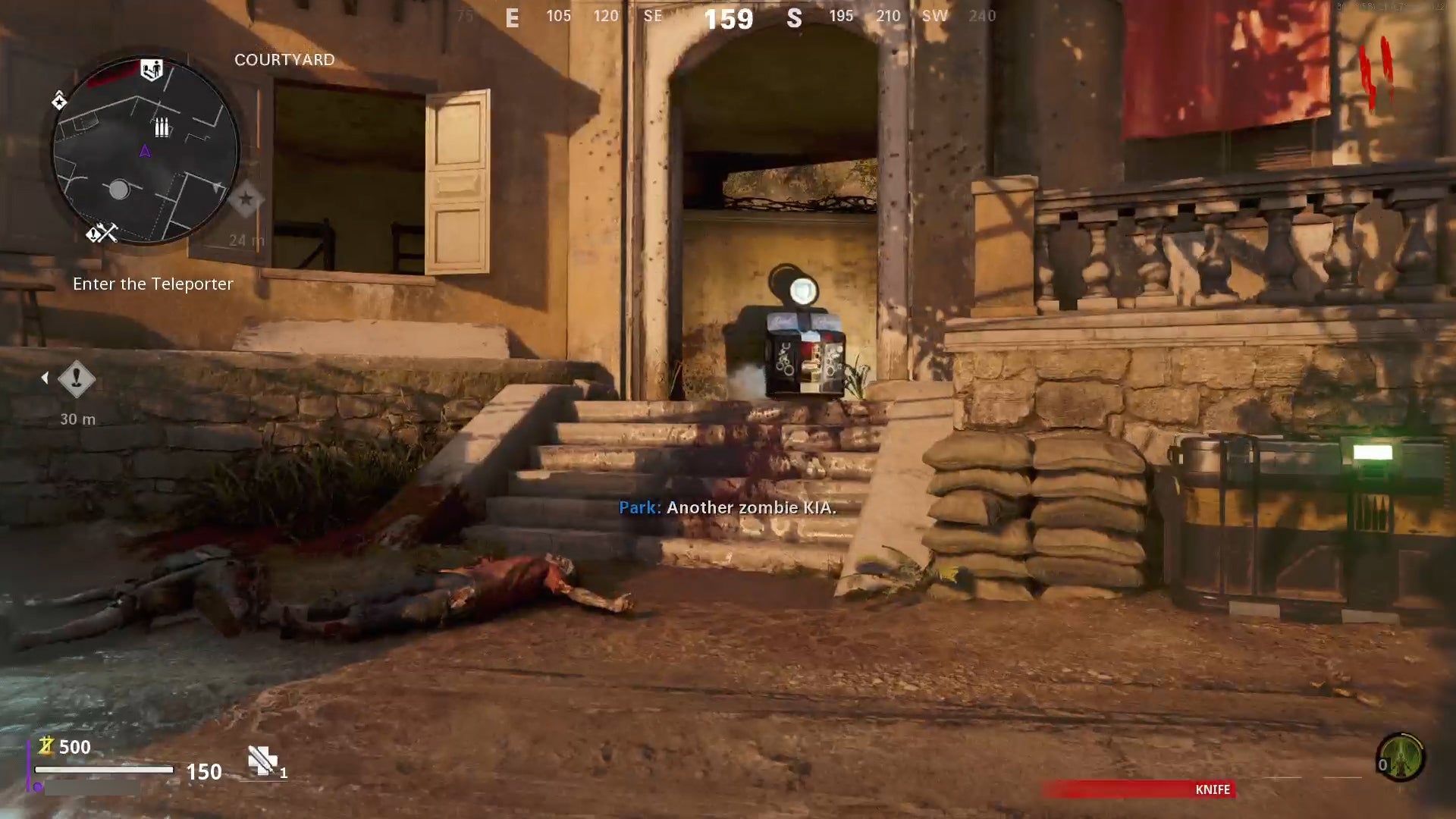 Looking for something specific? Click the links below to be taken to that particular section!

Step One: How to Pack-a-Punch and Turn on the Power in the Firebase Z Easter Egg

To kickoff the Firebase Z Easter Egg, you will want to start by tackling two of the key tasks that are part of every major Zombies Easter Egg – turning on the power and activating the Pack-a-Punch machine.

To do this, follow the waypoint marker as you make your way from the Courtyard to the Atrium. Once you arrive, speak with Ravenov and discuss the deactivated Pack-a-Punch machine that’s located next to the window.

Having spoken to Ravenov, he’ll inform you that you will need to use the Teleporter to reach the Omega Base.

How to Enter the Teleporter

In order to reach the Teleporter, collect and use 1,250 points to unlock the door that leads to the Equipment Storage area that is located directly opposite the Courtyard. Using the stairs, continue forward and you will eventually reach the glowing Teleporter.

How to Activate the Aether Reactors

Upon arriving at the Omega Base, you’ll find yourself at the Helipad. Here, you will now need to find and activate all three of the Aether Reactors, which all require 500 points each in order to activate.Once you have activated a reactor, you will be tasked with defending collection points while charging the reactors with zombie kills. As soon as charge meter is full, the reactor will ignite purple and release a blast that kills any nearby zombies.While we have listed the location of each Aether Reactor below, it is worth mentioning that if you do happen to become lost, you will find several glowing Dark Aether arrows around the map which will all point you in the correct direction of the reactors.

As soon as all three Aether Reactors have been charged, you will have successfully restored the power to the map.

How to Use the Pack-A-Punch Machine

Once you’ve managed to restore the power, make your way back to the Helipad where you will return to the Courtyard. Now in order to use the Pack-a-Punch machine, simply head to the Atrium and approach the machine next to Ravenov.Here you will be upgrade any weapon that you are carrying for 5,000 points, followed by 15,000 for the second upgrade, and 30,000 for the third upgrade.

While it’s largely dependent on your weapon, PaP upgrades are a must and are vital to your success should you opt to complete the Firebase Z Easter Egg. We are currently working on the guide, so please check back soon for a complete walkthrough.

To unlock the R.A.I. K-84 Wonder Weapon, you will have three different option. The first option is to spend 950 points on trying your luck at obtaining it through the Mystery Box. As you can imagine, your chances of receiving the R.A.I. K-84 will be extremely unlikely. The second option is to get it as a potential reward for completing Trials.

However, there is a third and final option which is arguably the cheapest and most reliable method available. While it may require quiet a few extra steps, you can obtain the R.A.I. K-84 Wonder Weapon for free by simply collecting a series of weapon parts.

For a complete guide on unlocking the R.A.I. K-84 Wonder Weapon for free, continue reading our guide below.

How to Find the Blueprint

Once you have turned on the power, you will now have access to the Weapon Lab, which is located within the Motor Pool area. When searching the room, you will find a Blueprint hanging on the wall by the bench in the back corner. Pick it up.

How to Find Kuhlklay’s Eye

With the blueprint in hand, make your way over to the Scorched Defense area. Here you will find the dead body of Dimitri Kuhlklay leaning up against the right side of a burning tank. When interacting with the corpse, you’ll retrieve Kuhlklay’s Eye.

How to Find the Locker Key

Now that you have obtain Kuhklay’s Eye, return to the Weapon Lab and scan the eye at the red-screened computer that reads “Prove You Are Me.” Once the scan is complete, a nearby draw will open and you’ll be able to pick up the Locker Key that’s found inside.

How to Get the Barrel Assembly

How to Solve the Dark Board Puzzle

Now that you’ve obtained the Barrel Assembly, return to the Weapon Lab and interact with the computer. Here you will find what appears to be a spinning radar that stops in three random locations.Memorize these three locations – they will be different for every player – and make your way to the Mess Hall, that’s located just left of the Atrium. Look for the Dart Board on the wall and while using a single shot weapon, shoot the numbers in which the location of the spinning radar would have of stopped. Once you’ve shot the numbers, finish the puzzle by shooting the center of the board.If you have successfully shot the correct numbers on the dartboard, you will have completed the puzzle a secret compartment will open, revealing the second part needed to create the weapon.

How to Get the Power Cell

In order to complete the R.A.I. K-84, we will need to obtain one final part – the Power Cell. To get the power cell, you will need to kill a Mangler, a mini-boss zombie that spawns on Round 15.

Tip: Remember to aim for the Mangler’s cannon arm, as it contains the Uncharged Power Cell.

Now that you have obtained all of the required parts, return to workbench where you originally found the weapon blueprint and assemble the R.A.I. K-84.

The R.A.I. K-84 has two unique firing modes – a full-auto and a grenade launcher. You can change between these firing modes by pressing the Up arrow on the D-Pad.

Step Three: Speak with Peck and Collect the Items Needed for the Gas Dispersal Device

Now that you have obtained the R.A.I. K-84 Wonder Weapon and have spoken to Ravenov after restoring the power to the village, listen for a call from Dr. Peck.Once you’re ready, head to Mission Control and speak with Dr. Peak by using the intercom system that’s just left of the window. Following your conversation with Dr. Peak, return to Ravenov in order to obtain an ID Badge.Using the ID Badge, you will need to unlock three large lockers to obtain three canisters of serum. You can find the lockers in the following locations:

Once you have collected all three canisters, make your way to the Field Hospital and interact with the Chemical Mixer and watch as the machine starts combining the compounds. Upon starting the machine, Hellhounds will spawn, so be prepared to take them down carefully.

Once the Hellhounds are defeated, pick up the Agent Delivery System that is found just left of the Chemical Mixer.Now that you have collected the Agent Delivery System, head to the upper area of Mission Control known as the OPC. When reaching the area, place everything that you have collected so far on the Air Conditioner that’s found just above Dr. Peck’s room. You will find the Air Conditioner in the corner, just right of the Mission Control doors.

Having placed down all the items, go to Mission Control and speak with Dr. Peck and watch as a cutscene plays out.Once Dr. Peck has stopped dancing, head to the Data Center and look for the Rocky Defense area. From here, interact with the Memory Transference Station and grab an Essence Trap from the machine.Acting as a Tactical, you can deploy the Essence Trap at any time, however, the trap will only capture a Mimic’s essence — which is done by double tapping reload — if they are standing on the trap and are low on health.

It’s important to note that not all Mimics will work with the trap, as only Mimics that spawn within the following areas will work: Colonels Office, Peck’s Quarters, and the Planning Office.

Once you have captured a Mimic, return to the Memory Transference Station and insert the Essence Trap on the right side of the machine. If you managed to collect the correct Mimic, you will receive confirmation from Officer Weaver.

Repeat this step a total of three times until you have successfully captured and stored all three Mimic Essences. Upon storing the third Mimic Essence, the Memory Transference Station will eject a the Floppy Disc that you can collect.

With the Floppy Disc in hand, head to the Planning Offices, which can be found above the Engineering room, and look for the computer that’s found by the windows. Insert the floppy disc into the computer in order to unlock the doors that lead to the OPC.

Once inside, wait for the dialogue to stop and watch as an anomaly spawns inside. Return to Mission Control and speak with Dr. Peck, who will close his window shutters.

Step Six: Collect the Aether Containers and Use the Aethermeter

After speaking with Dr. Peck, Ravenov will provide you with a code that will allow you to open a nearby locker that can be found just to the left of Peck’s window to collect the Aethermeter.

With the Aethermeter in hand, head to the Scorched Defense area. Enter the left bunker building and you will find a shovel leaning across the wall.

Once you have collected and placed all three Aether Containers in the Aether Reactors, return to the anomaly in the OPC and watch as a short cutscene plays out.

After watching the anomaly, wait for Weaver to contact you. As instructed, head to the Planning Offices and look for the desk that features a computer and monitor hanging on the wall. Interact with the computer and begin aligning the Satellite.

WARNING: Before you complete the satellite puzzle, be sure to prepare for the final boss fight, as completing the puzzle will cause you to the enter the final fight.

When you have found the yellow dot that features the “?”, interact with it in order to align the satellite. After aligning the satellite, watch as a bright red beam shines across the map. Once you’re ready, head to the OPC and interact with the computer terminal that’s right of the entrance to play a cutscene.

It’s worth noting that Orda is very similar to the same boss zombie that spawns during wave 30, so if you have managed to successfully fight that particular version of the boss, you will be well prepared for the fight that follows.

So, what’s the best way to defeat Orda? Well, we’ve compiled some of the our best Tips and Tricks for defeating Orda below.

Upon defeating Orda, watch as the final cutscene plays out and you will have successfully completed the Firebase Z Easter Egg.

Just one look at last year’s mind-bending reveal trailer for Maquette and I was enthralled. Its recursive twist on a first-person puzzler is...
Read more
Gaming

While it remains to be seen if God of War: Ragnarok is still releasing in 2021 as promised, fans can look forward to...
Read more
Gaming

Activision-Blizzard has reportedly laid off nearly 190 employees, including 50 employees from the company's esports division. Bloomberg reports that the layoffs affected less than...
Read more