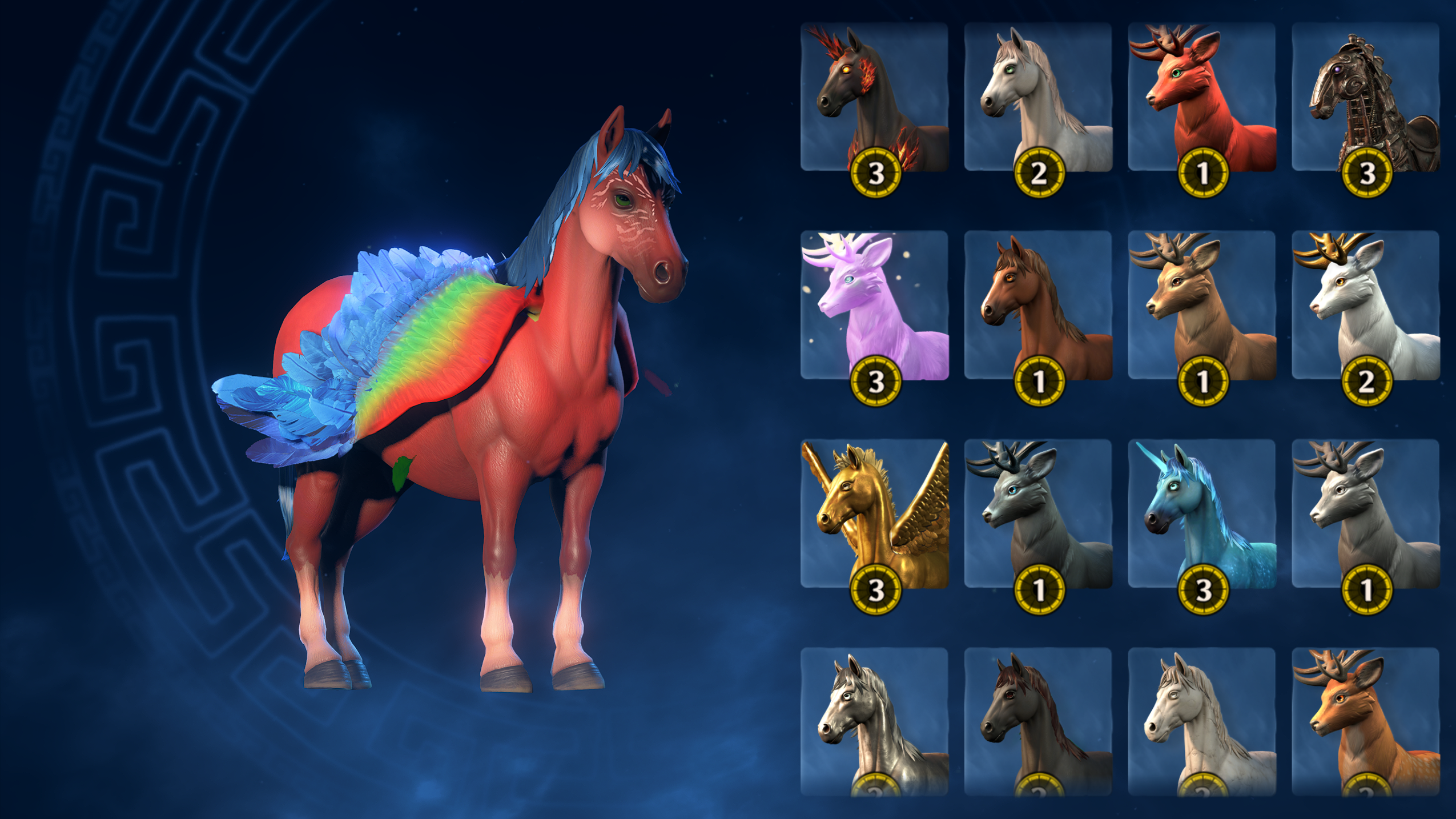 The list of mounts below is in Alphabetical order, just like in the pause menu. Use the sub-sections below to see the Mounts grouped by the areas in the game.

How to Tame Mounts

Mounts are unmarked on the map, even after you discover them, so the only way to find them is to spot them as you’re exploring the Golden Isles. Mounts can have either 1, 2 or 3 Stamina Bars; mounts with 1 or 2 are found in herds, while those with 3 are found on their own.

To tame a mount, Crouch and approach it carefully so you don’t spook it. As you approach, a mount will face you and the camera will point to them. When they have a red exclaimation mark above their head, stop so you don’t spook them. The higher their Stamina, the more skittish they’ll be. Once you get close enough, Mount them to tame them!

You can access all of your tamed mounts found the Inventory Menu. Unlike all other inventory items, Mounts don’t have any perks outside of their Stamina, and you cannot equip one Mount and apply the visuals of another one either.

The Forgelands, the Grove of Kleos and King’s Peak will have multiple herds of the same species, namely Hellebore, Itea, Larkspur and Quicksilver. You do not have to go after every herd: taming even one example will tame the rest of its species.

Found in War’s Den, in a pit behind the big throne room building in the South-East end of Ajax’s Fort.

Found in the North-West corner of the Eternal Spring, West of the Gaia’s Soul tree. In this area are some tall rock pillars; check the field to the East of them to find this herd.

Located in the Eternal Spring, close to the Helping the Anemoi Vault. Since it’s located directly between the Hall of the Gods and the Observatory in The Clashing Rocks, you’ll very likely encounter this herd close to the road while doing the Gods and Monsters mission early into the game.

Found in The Forgelands, North-East of Atmos Mechanikos and West of the Arena of Bravery Vault. Look for it in a barren plain near the bottom of a cliff.

Can be found very early in the climb up King’s Peak. From the start of the path that starts the climb, head East to find a large lake, then go North upstream into a valley. You’ll find Asphodel at the end of the valley near some waterfalls.

Located in the Eternal Spring, directly North from the Big Lyre. Warp there, then simply head North, across the path and up the hill to find the herd.

Found North-North-East of Aphrodite’s Bewilderment Vault. Head North of this vault to find a large statue of a woman with a bowl in one hand; the Cypress herd will be North-East of it near the path.

Located in the Grove of Kleos. To the West of The Archives (or North of the Daidalos’s Treasury Vault) will be a pond with the herd grazing around it.

In the North-West corner of the grove of Kleos, at the feet of an enormous archway at the start of a broken bridge.

One of four Mounts that can be found in multiple locations. The first herd can be found near the start of the path that begins the long climb up the mountain; they’ll be in river running along the East side of the path.

The second herd can be found shortly after you climb along two rock giants in a river. When you defeat a Minotaur near a broken bridge, drop down the small cliff to the South to find the herd.

The third herd is found shortly after the King of the Gods statue. Head North up the path, but keep an eye on your left near the broken walkway to spot the herd in the trees.

One of the two unicorns on the island, it’s highly recommended that you pick up either this or Tyrian as they are the earliest Mounts in the game with three Stamina bars. Indika is found South of the Gaia’s Soul tree in the Eternal Spring; look for it among the large roots in the water.

Another Mount with more than one herd, both in the Grove of Kleos. The first herd can be found along the Southern border, around a giant golden pegasos pillar.

Found in The Forgelands, on the Northern-most island at the North-West corner of the region. There’s several roaming around the lake, but if you head to the building, you can find two in a pen to the right of the building’s entrance.

Found near the North corner of Ajax’s Fort in War’s Den. At this corner is a trio of buildings: check to the West side of the most Eastern building to find the herd.

Found in The Forgelands. Directly North of The Aquaducts is a bay; here is an Arrow Plate puzzle, with the Krystalline herd located in it.

Found in the Grove of Kleos, there are two Larkspur herds you can find to tame one. The first is found around a pond: it’ll be just North-East of a farm made of blue flower fields that’s located right on the border to the Gates of Tartaros.

The second herd can be found around a pond directly North of the Goddess of Wisdom statue. It’s East of the North-East corner of a square building with a Fresco Challenge inside.

The only Mount found roaming in the Clashing Rocks, Laurion is found in the flat area of the small island located North-East of the large island South of the main area. While technically the earliest mount you can find in the game, you can’t easily access it until you gain the Glide ability for Ikaros’ Wings, or save up a large amount of Blue Mushrooms for the swim over to it.

Found near the Southern coast of War’s Den, the Muse herd is found in the field directly North of the Sanctuary of Erebos vault.

Located in War’s Den, Paragon can be found among the two ponds in the most North-Eastern point of the region.

The most flamboyant Mount in the game, Ptilon is found North-North-East of Zeus’ Throne at the top of King’s Peak; by the time you climb it, you should have plenty of Stamina to glide right to it.

If you want to get Ptilon during the ascent up the mountain, wait until you get to  a spot as you head along the Northern slopes of the mountain where you’ll do a long glide under some giant pointed outcroppings with an updraft at the end.

Head down to the end of the path where there’s a rock giant; the path will lead under his arms. Instead of going down the path, drop down to its feet to land at a large ice lake. Ptilon will be among the snowy ledges to the left of the lake.

Found in The Forgelands in three different herds. The first of these is in the corner of the Western border located directly South of the giant lake in the Grove of Kleos.

The second herd is found on the slopes of grass on the Western-most corner of the Forge of the Gods.

The third Quicksilver herd is in a plain on the Eastern coast, just North of a Constellation Challenge.

Found in the Grove of Kleos along the North coast. To the West of the Dolos’s Stage of Trickery Vault is a pool; the herd of Sheena will be around the pool.

This Mount is only available if you pre-ordered the Season Pass.

As mentioned above, Spring is only available to you if you pre-ordered the Season Pass of the game. This unlocks a trio of missions that ends in the Clashing Rocks: complete them all, and you’ll be awarded Spring.

Tyrian is the other early Eternal Spring unicorn in the game: you’ll want to get either it or Indika so you can get a Mount with 3 Stamina as early as possible.

Tyrian is found in an island meadow that forms the most Southerly point of Eternal Spring’s Southern coast. It’s South-West of the Arena of Fortitude vault.

Found in War’s Den, the herd of Xenippos is located in the grassy slope North-West of the Protector Drakon Ismenios Fast Travel point.

Last Edited: 22 May 2020 10:39 amManeater is a simple game about a shark looking to eat literally everything it can - but...
Read more
Gaming

The Biggest Nintendo Surprises and Disappointments of 2020 – NVC 539 – IGN