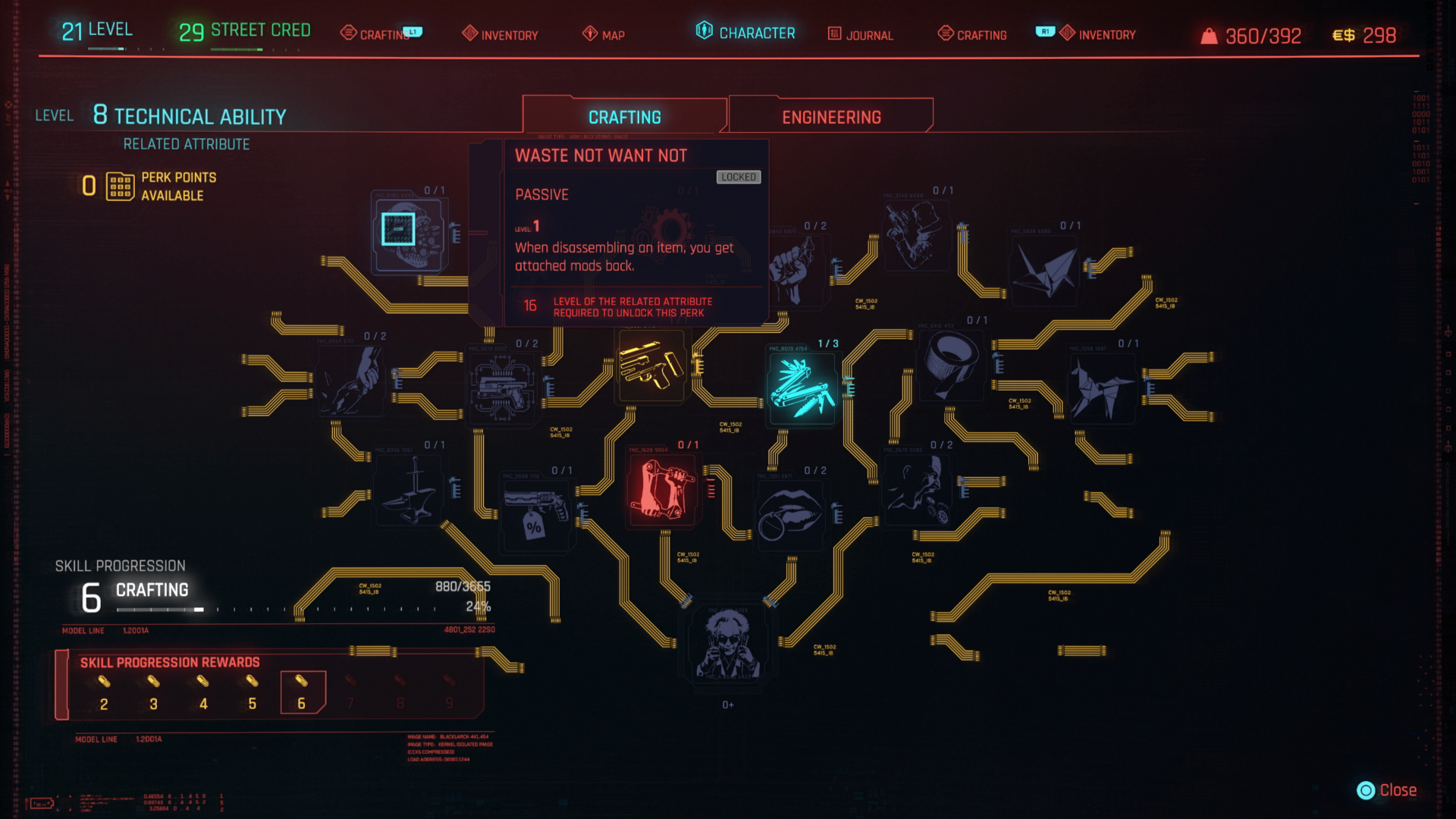 Before we delve into the best weapon and clothing mods to use, there are a few things that you will need to take into consideration before using them. To get started, we have compiled several tips to get you started:

Crunch is arguably one of the more impressive mods available for your weapons, as it features a damage increase of +5, followed by an additional +1 damage for each rarity tier.

Sold randomly throughout the different weapon vendors of Night City, players will even have the option to craft their own version of the mod should they have the requirements needed to craft the mods higher tiers – Epic and Legendary.

For those that would prefer to craft their own, you can pick up the Crunch crafting spec from the 2nd Amendment shop, which is located near V’s apartment in Little China.

If you’re struggling to afford some of the more expensive weapon mods, look no further than the Pacifier. This particular weapon mod features a +6% Crit chance that can also increase by +2% for each rarity tier. Meaning that the mod can reach a +14% Crit chance should you be using a legendary variant.

You’ll find the Pacifier mod available to purchase at the Weapon Shop in Wellsprings, Heywood. If you’re looking to craft the mod yourself, it can also be purchased from the same store for $2,500 eddies.

Happen to be short on Eddies, but looking to take full advantage of a mod that’s somewhat similar to Dead Eye? Well, look no further than the Bully clothing mod, as it features a +30% increase to your Crit Damage.

While it may not be as powerful as some of the other mods on this list, this particular legendary clothing mod remains an increasingly popular choice – and rightfully so – as the legendary mod be picked up completely free of charge during the I Walk the Line main job.

If you’re interested, you can find the Bully mod in a crate within the Netwatch Agent’s office during the main job.

Pairing well with the likes of the Predator mod, you’ll quickly learn that the Dead Eye mod does not come cheaply and will set you back over 90,000 Eddies.

Despite the heft fee, the Dead Eye mod does happen to offer some of the best stats across the board and should not be passed up if you’re looking to create a powerful damage based build.

The Dead Eye mod will offer a +15% Crit chance, along with a very impressive +30% Crit Damage.You can pick up your own Dead Eye mod by visiting the Avante Clothes Shop, which isn’t too far from the Ripperdoc that can be found in the Westbrook area. Should the item not be available, simply leave the store and time travel 24 hours, which should completely restock the store, offering a new range of mods and clothing.

Offering +25% bonus damage against both high-threat enemies and moderate-threat enemies, the Predator mod pairs perfectly with the Dead Eye mod.

Found in the same clothing store as the Dead Eye mod, Avante Clothes Shop, you will have the opportunity to purchase the mod should it become available. Much like the Dead Eye mod, the Predator Mod does not come cheaply, as you can expect to pay upwards of $80,000 Eddies!

For those looking for a little more armor defense, the Armadillo mod is a great clothing mod to consider. With an armor increase that ranges based on your mods level, you can expect to receive a level increase that’s anywhere from 2 to 150. In addition, you will also receive an additional +20% per your mods rarity tier.

As you can imagine, when using this mod at a high level and when combined with the legendary rarity tier, you’ll be receiving some insane armor increases.

Xbox announced a new wireless headset for Series X and S earlier today, but attentive fans may have actually caught a glimpse of...
Read more
Gaming

Last Edited: 24 Feb 2021 11:05 amHow to Build PortalsPortals can be acquired surprisingly early, which is helpful as you begin exploring the...
Read more