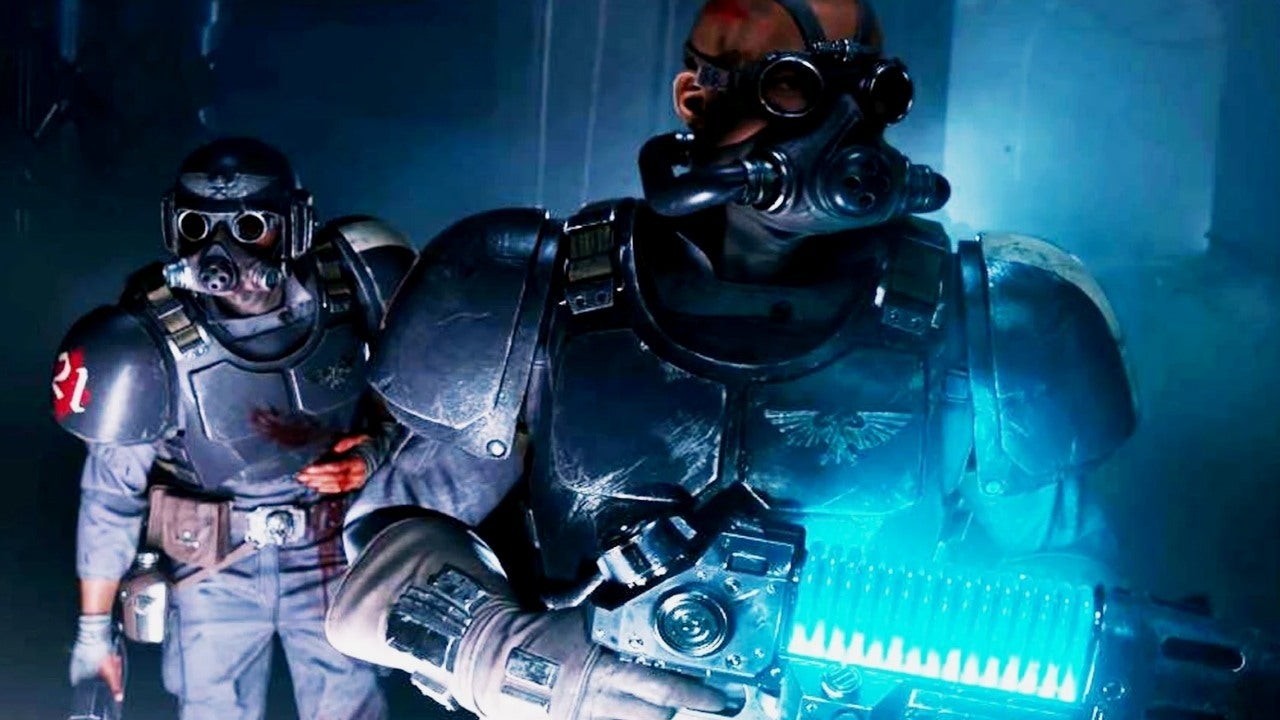 In its two Vermintide games, developer Fatshark has proven its dedication to recreating the fine details of Games Workshop’s Warhammer ‘Old World’ setting. The studio’s next game, Warhammer 40,000: Darktide, sees the same team explore the very different – but equally dense – 40K universe. And after a recent chat with a handful of Fatshark staff, it’s safe to say that they are nerding out just as much as they did on Vermintide, if not more.“How should we do the chainsword?” asks Mats Andersson, Game Designer on Darktide, recalling an early design meeting. “Because it shouldn’t just cut. It should stick in, it should saw through, and then we should have a second damage that actually pops the [limb] off.”

The chainsword is Warhammer 40,000’s most recognisable close combat weapon; a device swung like a medieval longsword, but with the blade exchanged for a 30-inch long chainsaw. Hack into someone with it, and the result is akin to Gears of War’s Lancer MK2 bayonet, but significantly more goth. This gory, mechanical process, described in the many Warhammer 40K source books and novels, has meant recreating it has required a slightly different approach to Vermintide’s fantasy knives and axes.“And the coder is just like, ‘But can’t we just chop the head off?’” recounts Andersson. “‘No, no, no. You have to go into the neck and saw down. And then you’d rip it out and that’s when the head comes flying off. This is not other weapons, this is a chainsword.’”

Adjust that last sentence a little, and it could be a seeming design philosophy for Darktide: this is not other shooters, this is a Warhammer 40K shooter.

Like the Vermintide games before it, Darktide is a Left 4 Dead-style co-operative game in which teams of four progress through levels that are governed by an AI ‘Conflict Director’. That AI dictates what enemies the team will face; in Vermintide that was generally packs of man-sized rats known as Skaven, but in Darktide players will carve their way through hordes of Poxwalkers. These undead horrors, created by the literal god of disease, have provided the perfect next step in evolving Vermintide’s gory melee systems.

“Looking at the amount of weapons we did for Vermintide, we have quite a robust set for us to paint a vivid picture of how to break bodies,” says Andersson. “And it’s just about applying that and expanding it specifically with the different enemies. There’s a difference between a Poxwalker breaking apart and a Renegade Guard breaking apart.”

Having opted to cast the forces of Chaos as the game’s villains, Fatshark has a huge canvas of potential enemies to pull from (Games Workshop’s range of Chaos miniatures for the tabletop number at well over 100). “The options of using Chaos is almost endless,” says Anders De Geer, Darktide’s Game Director, who also just so happens to have a collection of Chaos Cultists on his tabletop. “From cultists, to daemons, to Traitor Marines, the scale is enormous.”

The most important aspect of Darktide’s foes, though, is that they’ll often be wielding guns. Where Vermintide was predominantly a melee game, Darktide’s 41st millenium setting allows ranged weapons to be a significantly larger portion of the game. This creates a variety of opportunities for gameplay encounters, as well as replicating the distinct shoot and fight phases of the tabletop game – but more than that it’s been a chance for Fatshark to get incredibly nerdy about bringing 40K’s vast arsenal of absurd guns to life.

“We have worked on the visuals of the Lasgun for a pretty long time,” says De Geer, referring to one of 40K’s most common weapons. Darktide’s version of the rifle is based on the M35 model, a variant chosen from “a list of 150 different patterns”. Some adjustments have been made to the version hobbyists will have painted – Fatshark has added a loading mechanism to the side – but already fans have responded kindly to the authenticity of its almost World War 2-like operation, as seen in the first gameplay trailer.

“We want to live up to people’s expectations around weapons, but we also want to make sure that their favorite weapons are represented,” says Steve Bigras, Darktide’s Executive Producer. “And so there’s been a lot of work put into [thinking] ‘Is it okay if a Guardsman can even have this? Because it’s such a cool and iconic thing.’ We’re really trying to do our best to make sure that peoples’ favorite weapons are there, and they make sense. And maybe some of them you might have to squint your eyes a bit, but you’re happy that you get to play with it.”

While the chainsword and lasgun are among Warhammer 40,000’s most beloved weapons, the most iconic is unquestionably the Bolter; a boxy automatic assault weapon that fires explosive bullets. They’re the signature weapon of 40K’s most recognisable warriors: the Space Marines. But in Darktide, you play as regular humans rather than those superhuman posterboys, and the recoil of a Godwyn Pattern Boltgun would break a normal soldier’s bones. This meant Fatshark had to dig a little deeper into the lore to get the gun into Darktide without breaking canon.

“We had quite a vivid [discussion about gun caliber] early on between art and design and everyone else,” says Andersson. “We have human sized Bolters, which is their own pattern,” adds De Geer, referring to smaller variants of the gun described in the tabletop game’s lore, such as the Locke and Godwyn-De’az patterns.Adding the Bolter to Darktide’s arsenal provides a new angle for gameplay design, since the gun is effectively a rapid-fire grenade launcher. “There are very few weapons that just work as a gun,” says Andersson. “They all do different things. From the Bolter, to the Lasgun, to another one, to whatever. And integrating that into the gameplay, you can actually have a player utilize that to take out the different things, and at the same time we’re cashing in on your expectations.”

Those different things currently consist of a whole host of Chaos troops and daemons, but Fatshark appears to have significantly long-term plans for Darktide. One day we could be jamming the muzzle of a Bolter into the maws of 40K’s cockney greenskins.

“Every single interview [Andersson] will talk about Orks, but it’s not their time yet,” says Martin Wahlund, co-founder of Fatshark. “At some point they will matter, I promise you, but I don’t know when… We see this as a long, continuous journey, so to speak, that we want to build over time.”

And, with any luck, there may be more than Orks in the future, too. “When we started Vermintide 1, the Old World was an active IP,” recalls De Geer, referring to the original version of Warhammer Fantasy that has since been discontinued. “And then it stopped being an active IP. And so this time we felt that we want to be current. We want to be able to connect to whatever Games Workshop plans for the future, and so Darktide is very much current 40K, it’s the latest and greatest of 40K.”

That means Darktide is set during Era Indomitus, the storyline currently powering 40K’s 9th edition on tabletop. And while Chaos remains humanity’s greatest threat, this new phase has placed greater emphasis on 40K’s stranger, more out-there foes, including the skeletal Necrons. If Fatshark plans for Darktide to be a platform for all kinds of 40K conflicts, then they couldn’t have begun development at a more exciting time for the setting. The studio is still holding many cards to its chest about Darktide’s intricate details, but what they will say points to a reverence and depth of understanding of the 40K universe rarely seen outside of Relic’s Dawn of War games. So while Fatshark still has much to prove, one thing is certain: the universe is certainly in passionate hands.

AMD Expects PS5, Xbox, and PC Chip Shortages Through First Half of 2021 – IGN

Despite AMD's record breaking 2020, it anticipates PS5, Xbox Series X/S, and PC chip shortages to last through at least the first half...
Read more
Gaming

How to Build and Use a Cart – Valheim Wiki Guide – IGN

Last Edited: 24 Feb 2021 4:46 pmIncreasing Your Inventory Space and Character Weight in ValheimTired of constantly running out of inventory space and...
Read more
Gaming

Stonefly, the latest game from Creature in the Well developer Flight School Studio, looks to be uplifting… literally. With much of its gameplay...
Read more