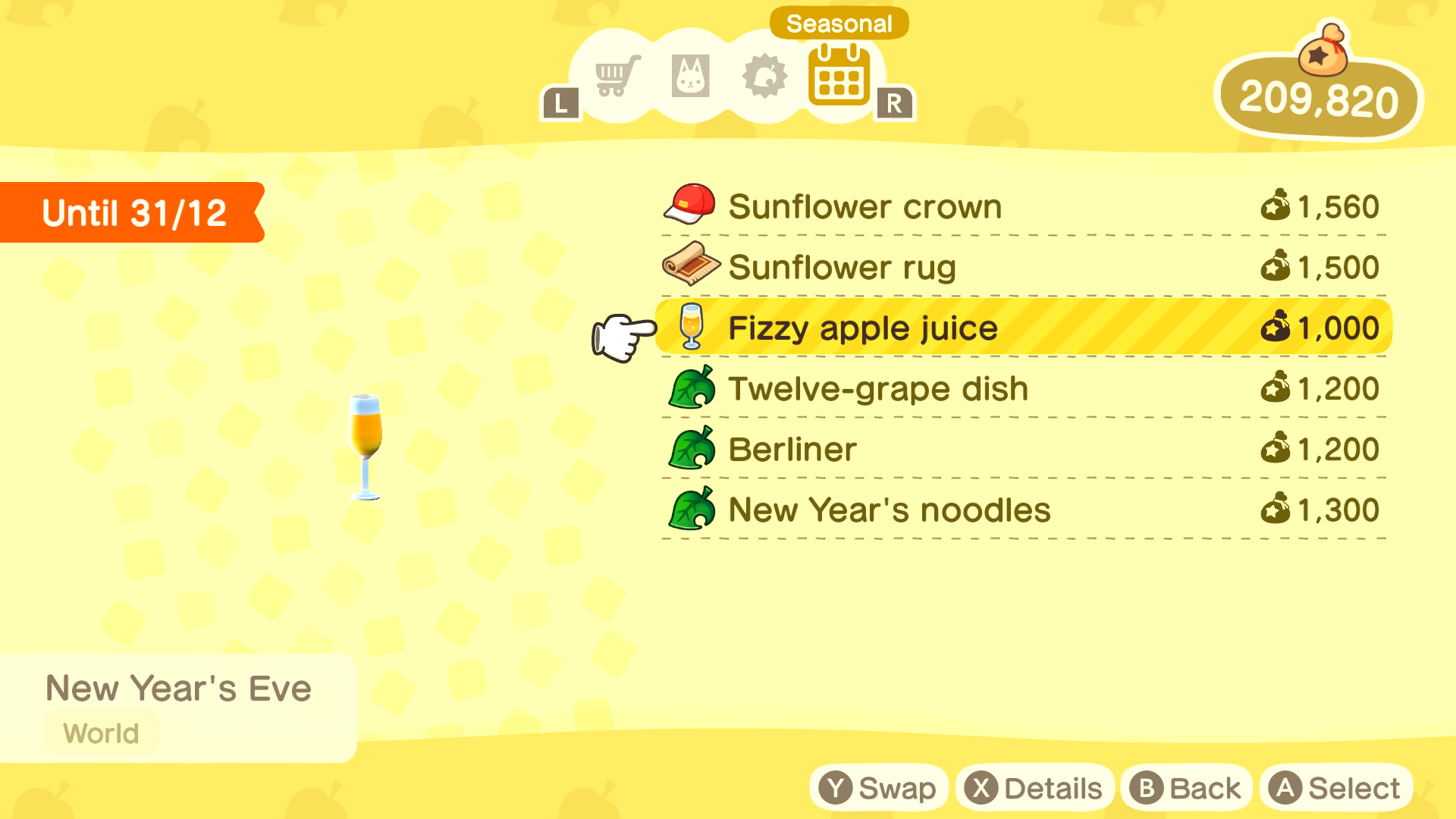 While the Countdown Board is up on New Years Day, you’ll be unable to enter Resident Services and use the facilities inside, such as the Recycling Bin, the Nook Stop vendor machine, as well as Tom and Isabelle’s services like building and villager management.

Balloons have also been placed around the back of the plaza, but you can in fact walk through them if you need to.

Starting on the 26th of December (also known as Boxing Day), you can order several items from Nook Shopping. Visit the Nook Inc. Vendor, or use the app on your phone if you have it, then go to Special Goods, then go to the Seasonal Tab.

You’ll want to order these items now, as they become unavailable starting on January 1st. If it’s New Year’s Eve, then Resident Services will be closed and you’ll have to use the Nook Shopping app on your phone. If you don’t have the app yet, you’ll have to time travel to an earlier day to order them.

To start New Year’s Eve festivities, head to the Resident Services Plaza and talk to Isabelle. She’ll explain that Resident Services is closed today and that the event will begin later in the day. In the meantime, she’ll give you a Light Stick!

The Light Stick is an equippable item just like tools. When you have one in your hand, hold A to shake and wave it about! You’ll only get one from Isabelle, so treasure it!

Now talk to Tom Nook, who has set up a New Year’s Eve stall, and he’ll offer you some Party Poppers. Party Poppers work just like they did in the Fireworks Day event: they’re one-time use items that shoot confetti when you press the A button. You can hold a stack of them in your hand, letting you fire off several of them at once!

Talk to Tom Nook a second time, and you can browse his New Year’s wares. He sells Party Poppers in groups of five for 300 Bells, and New Year’s Hats for 500 Bells. The New Year’s Silk Hats come in four colors of your choosing: Yellow, Orange, Blue and Aqua (also known as Cyan), and you can buy as many of them as you like!

You’ll want to buy the Silk Hats now, because they’re only available on New Year’s Eve! The Party Poppers are available from the cupboard in Nook’s Cranny.

Starting at 11:00pm, Isabelle will ask everyone to go to the plaza, and the festivities will begin! You can talk to Isabelle and your villagers for new dialogue if you wish.

There is one thing you can do before the party truly begins. The best time to do this is at 11:30pm, which is when your villagers will gather around the Resident Services plaza for the countdown, although one or two may still be in their houses at this time.

What you need to do is buy and wear any of the New Year’s Silk hats available from Tom Nook. Wear one, then talk to a villager at least twice: they’ll realize they aren’t wearing one, and put on a hat themselves! Your villagers will do this as New Year’s approaches, but this is much more fun!

With that done, all you need to do is wait for the timer to count down!

Here’s a great tip: your plaza will only have seven villagers in it at a time, but if you want a different set, Save and Exit with the – Button, then quit and restart the game! The game will then load in a new set of villagers. You can use this after the countdown ends too!

Welcome to the new year! To celebrate, fireworks will light off in the sky, and you’ll get the Countdown Celebration Nook Miles achievement for attending the event! Unfortunately, you cannot customize the fireworks like with Fireworks Day in August.

You can now talk to your villagers, and Isabelle, to wish them a happy new year. Everyone, including the villagers still in their homes, will have four things to say, except Tom Nook who has one, and Blathers, who has none (guess owls don’t celebrate New Year’s!).

Tom will still be available in the plaza if you still want one of the silk hats or need to top up on Party Poppers.

At the 5:00am reset, Isabelle and Tom will pack up, meaning you can no longer buy the New Year’s Silk Hats. But at least Resident Services will be open again!

After the 5:00am reset, there’s a few more new, minor things. First, there’s yet another new music track just for January 1st that lasts all throughout the day. Second, your in-game mum will send you a present in the mail: Mom’s Art, a cross-stitch piece of art! Thirdly, your villagers will discuss the new year if you talk with them several times.

The fourth change is at the Nook Inc. Vendor. Because Resident Services was inaccessible on New Year’s Eve, interacting with it today will give you 500 Nook Points, and set your daily access bonus to 7+ regardless of what it was before! Sweet!

Finally, you’ll want to check the Seasonal Section of Nook Shopping‘s Special Goods, as seven new items have been made available until January 15th. You can only order five items per day, meaning you may need to buy them over two days. The items are:

A coffee break in the United States and elsewhere is a short mid-morning rest period granted to employees in business and industry. An afternoon...
Read more
Business

Call of Duty Warzone appears to be teasing a Zombies crossover, with out-of-place trial machines and screen distortion being reported by players.As spotted...
Read more