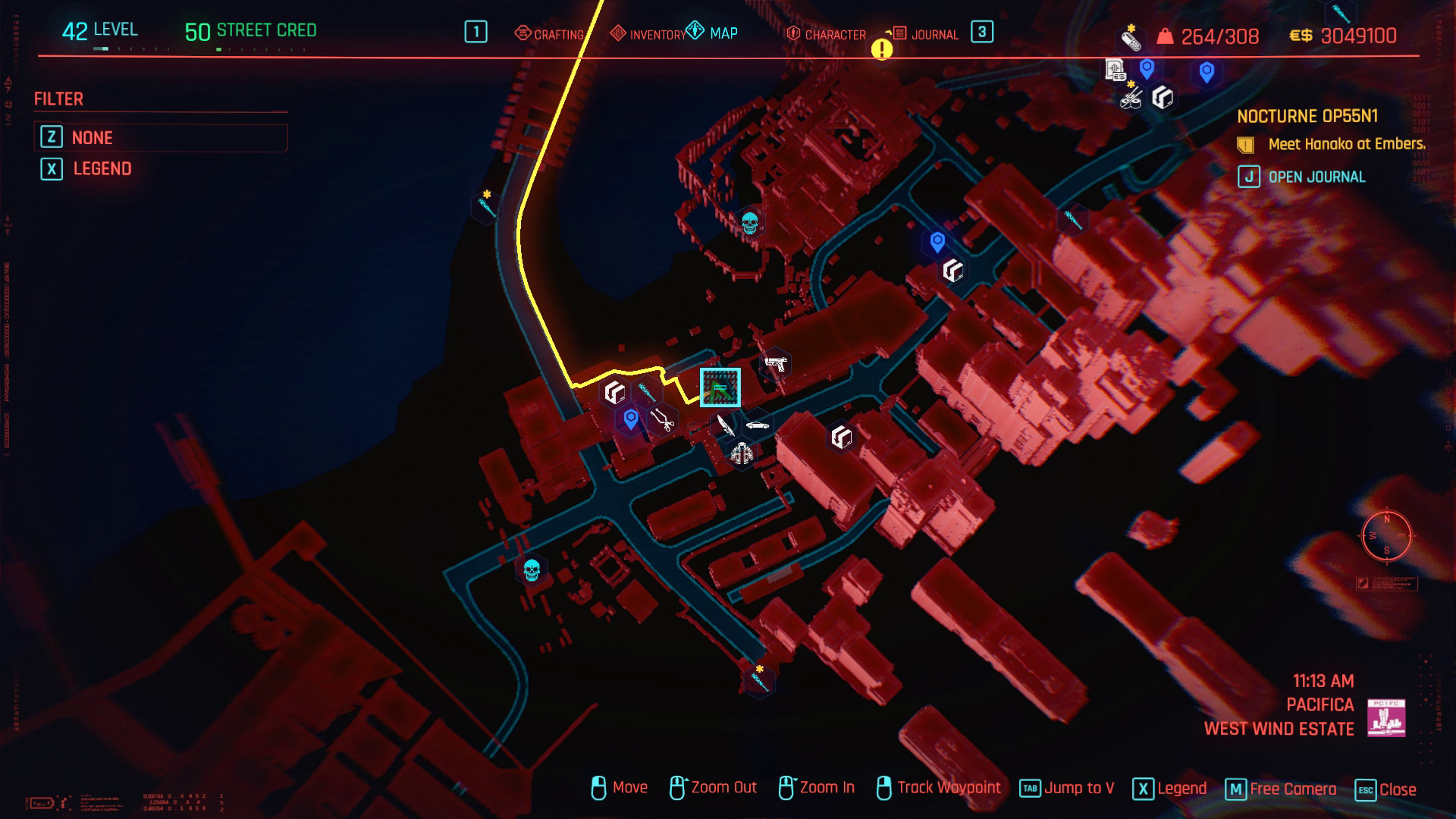 How to Farm Experience, Skill XP, and Street Cred Quickly

Using this method, you can quickly trace a route through a certain location in Night City where enemies respawn quickly to earn tons of experience by defeating them with whatever weapon you desire.

Note: Your basic build for this XP farm should include having a set of Projectile arms with Tranquilizer rounds installed, and whatever weapon you’d like to passively level up on hand. The Projectile Arms and tranquilizer rounds can be acquired from the ripperdoc in Heywood.

Simply have the arms installed and add the tranquilizer rounds in the cyberware menu. Then, your game difficulty to the hardest, go to the location in Pacifica shown in the accompanying screenshots, and run a loop. The enemies will keep spawning and with this method you can average a level every 5-10 minutes on this farm.

You’ll also get a tremendous amount of Street Cred for each kill so you can max it at 50 in no time. The added benefit of this run is that it gives you experience with any weapon you choose to level. You can do this farm with shotguns, handguns, melee abilities… you get the idea.

Because the tranq round is a one shot knockout, you can then get incredibly easy experience points by simply shooting the incapacitate enemies on the ground.In addition to being able to level up your gear, you also get a tremendous amount of crafting loot that you can pick up after a few loops of the circle. Just pick everything up and dismantle it all for a huge amount of crafting materials.

Get A Permanent Ripperdoc Discount on Cyberware

There are many Ripperdocs that live all over Night City that can install various expensive cyberware – but only one of them has something to hide, and will do anything to avoid getting caught.

One of the Ripperdocs in Watson is located just north of the Kabuki Plaza, and his name is Charles Bucks. When you first enter his shop and browse his selection, V can ask where he’s gotten such good expensive items, and Charles will nervously say that his supplies like to remain anonymous.

After Act 2 begins, return to the shop and start snooping around. There’s a locked door in his shop that can be hacked to remotely open – but if your Intelligence is too low, you can also head around to the other side of the large building to find a loading dock – where the local Fixer should also tell you about a nearby gig to find a laptop from a missing person named Alois.

From the loading dock you should be able to head through one of the open doors or windows on the second floor, and inside you’ll find a bunch of Scavs. Kill them all and head down into the basement to find a connecting room back to the Ripperdoc, where the Scavs harvest bodies and give the cyberware to Charles. To get even more confirmation, look for an open laptop near the operating table to find a message from Charles himself.

After you’ve killed the Scavs, return to Charles and he’ll get incredibly nervous, and you can tell him what you found in the basement. When he tries to plead his innocence, let him know you found his emails, and he’ll beg for you to look the other way – offering to make it worth your while.

Should you choose to accept this obvious bribe, you’ll gain a 20% discount on all the cyberware he sells. This can be a huge cost-saving boon for you if you really want to install more cyberware, as he sells many items that other Ripperdocs also sell – only his will be much cheaper – including the different arm enhancements.

If you’re looking to make some easy money, look no further than the dozens of vending machines scattered around Night City. Specifically, you’ll want to find the machines selling items for 10 Eddies each (not the $5 items)

Once you’ve located one of these vending machines, purchase all the items available until they are sold out.

Pick up all the items you purchased from the ground and add them to your inventory.

Now, open your inventory and find the items you just purchased. At this point, you want to dismantle all of them to obtain common and uncommon crafting materials.

Unlocking the Mechanic crafting perk will give you more crafting materials from disassembling items. It’s recommended that you spend one of your perk points on this to maximize your profit.

Next, head to your Crafting menu and craft as many uncommon (green) weapons as you can with the resources you obtained. You’ll gain crafting XP for each weapon crafted, which adds up very quickly and can be utilized to gain unlimited crafting XP.

Look for items that sell for as much as possible. You can view the sale price of each item by hovering over it before crafting it.

Lastly, head to a vendor or drop station to sell your newly crafted weapons for a hefty profit.

Using the Nekomata rifle in the photo above as an example, we were able to make $78 Eddies for each one (as it cost $100 Eddies for 10 cans of soda that were used for crafting materials). If you are purchasing as many cans as possible around the city and selling dozens of weapons this is an incredibly quick and easy way to make unlimited money as you explore Night City.

>First, check your quest log to ensure that you’ve completed the first main story mission of Act 2, Playing For Time, where you meet Takemura in the diner.

Then, travel to this location in Santo Domingo, a gas station with a homeless encampment. If the Space Oddity mission marker pops up, you know you’ve found the right one.

Approach the men standing by the table and engage in negotiations, aggressive or otherwise. Getting past them will allow you to either break into the laptop with your intelligence skill, or go to a location the homeless men told you about to scan a dead man for a code.

Once you have the location from the laptop, follow the waypoint to an area with seven soldiers. Take them out using whatever means necessary, and claim your prize from the center capsule. And don’t worry about the Scrapper perk. The painting you’ll receive isn’t classified as junk, so it won’t be auto-disassembled. Then, find the nearest drop box.

And that’s it! Rinse and repeat until the drop box runs out of money, and then go find another one.

Where to Find Skippy, The Talking Gun

To find Skippy, fast travel to the College St. metro station in Heywood. From there, you’ll travel south towards a question mark on the map indicating an optional side mission.

The location is marked below for reference.

When you approach the destination you’ll find a stack of cardboard bales. Climb onto them and over the gate.

On your left you’ll find a dead body, along with an open briefcase containing Skippy.

Skippy is, rather unexpectedly, a gun that talks and has an entire personality of its own. When you pick it up you’ll have a short conversation with the gun. Whatever you do, don’t try and change his name…

Skippy also appears to be a fan of Rihanna. Glad her legacy lives on in 2077.

What Setting to Pick for Skippy

Skippy will end the conversation by asking if you want it’s auto-targeting features to be lethal (Stone Cold Killer mode ) or non-lethal (Puppy-Loving Pacifist mode).

Skippy is an incredibly powerful and unique smart pistol that scales with the user’s level.

Niantic founder and CEO John Hanke shared a small teaser of what looks to be a pair of AR or XR glasses from...
Read more
Gaming

It makes sense that Ember Lab, the developer of Kena: Bridge of Spirits, started out as an animation studio. Just looking at this...
Read more