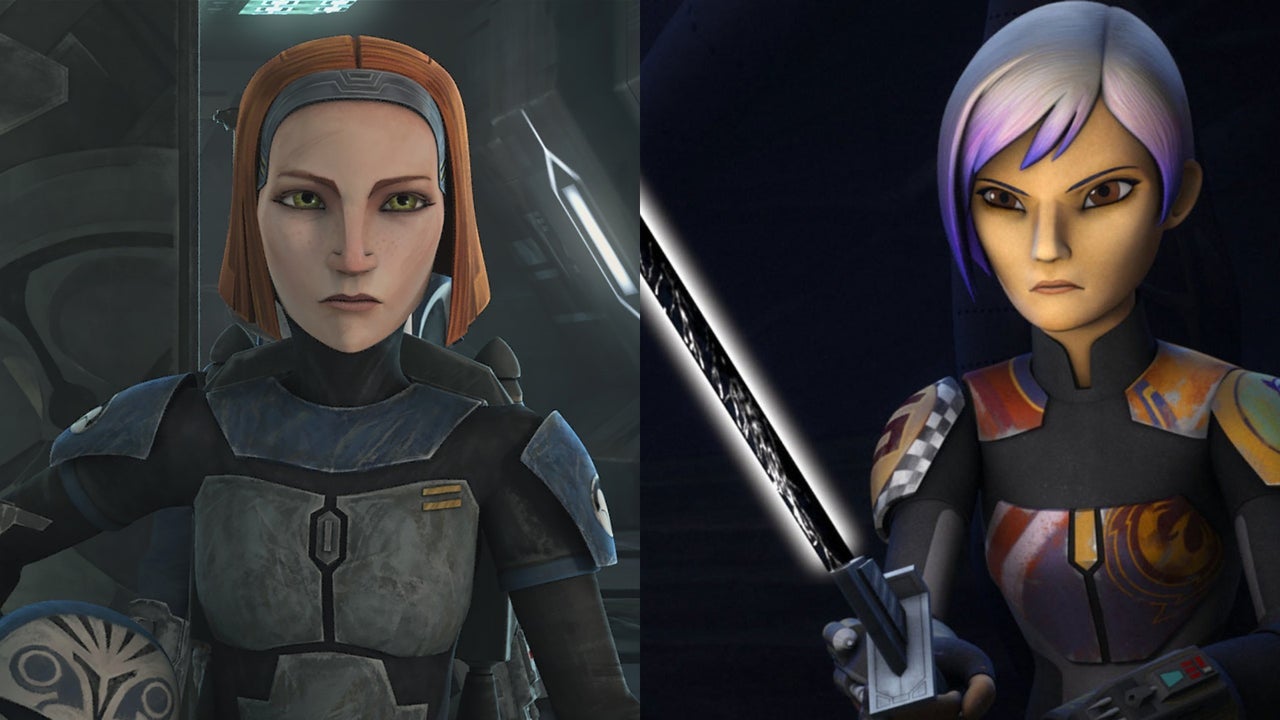 The Mandalorian Season 1 introduced a weapon with a major legacy in the Star Wars universe. The Darksaber returned in the hands of Moff Gideon in the Season 1 finale, with Season 2 subsequently introducing one of the Darksaber’s previous owners in the form of Katee Sackhoff’s Bo-Katan Kryze. And with the darksaber now in the hands of Mando himself following the Mandalorian Season 2 finale, it’s safe to say this blade will continue to play a big part in the series.If you’re confused as to why everyone seems so fixated on a black lightsaber, fear not. Here’s everything you need to know about the Darksaber and how it ties the series back to the events of Star Wars: The Clone Wars.

What is the Darksaber in The Mandalorian?

The Darksaber is unique among all the lightsabers in the Star Wars universe. It has a flat, katana-like blade rather than the traditional saber shape. It emits a peculiar, low hum. Even its color is unlike any other – deep black with a bright white halo.

The Darksaber is one of the most important artifacts in Mandalorian culture. It was created by an ancient warrior named Tarre Vizsla, the first (and as far as we currently know, only) Mandalorian to be inducted into the Jedi Order. That event happened at least 1000 years before the time of the movies, with Vizsla’s existence forgotten by all but the most devout Mandalorian warriors and historians.The Jedi kept Vizsla’s signature blade on display as a museum relic, at least until the Mandalorians stole it back. Since then, the Darksaber has come to serve as a symbol of power for Mandalorians. Whoever wields the blade is viewed by Mandalorian traditionalists as the rightful ruler of Mandalore, as Moff Gideon explained in the Season 2 finale. Defeating the blade’s owner in ritualistic combat is the true path to power – which could present a problem between Mando and Bo-Katan.

Have you watched Star Wars: The Mandalorian?

Learn even more about the history of the Darksaber in our Star Wars wiki guide!

How Did Moff Gideon Get the Darksaber in The Mandalorian?

Unfortunately, the Darksaber has a habit of trading hands again and again. During the Clone Wars, Tarre Vizsla’s descendant Pre Vizsla (voiced by The Mandalorian creator Jon Favreau) used the blade to rally his Death Watch recruits against Mandalore’s political leader, Duchess Satine Kryze. Pre Vizsla made the mistake of forging an alliance with ex-Sith Lord Darth Maul, who killed him in ritualistic combat and became the new leader of Death Watch.

At some point during the waning days of the Clone Wars, the Darksaber fell into the possession of the Nightsisters of Dathomir. It was then claimed by Sabine Wren, a Mandalorian expatriate and member of the Rebel Alliance. Sabine used the blade to rally her people against Viceroy Gar Saxon, the Imperial-appointed ruler of Mandalore. Sabine then bestowed the Darksaber to Bo-Katan Kryze, sister of the late Duchess Satine.That act seemed to open a brighter future for Mandalore and its people. Unfortunately, The Mandalorian has repeatedly hinted at a dark fate for this planet, with several characters alluding to the Empire’s purge of Mandalore and the survivors being forced into hiding. In The Mandalorian Season 2 finale, Moff Gideon implies that he himself may be responsible for overthrowing Bo-Katan and robbing Mandalore of its rightful ruler, which would explain the animosity between the two of them hinted at in Bo-Katan’s first Mandalorian appearance in episode 203.

We’re certain to learn more about the darksaber’s history and the previous encounters between Gideon and Bo-Katan in The Mandalorian Season 3, although it remains to be seen why Bo-Katan was willing to accept the darksaber from Sabine but refuses to take it from Mando without fighting him for it.

The Mandalorian’s Season 1 finale revealed the real name and origin story of Pedro Pascal’s titular character. We saw a young Din Djarin narrowly survive a Clone Wars battle that claimed the lives of his parents. Though Din isn’t a Mandalorian by birth, as a “foundling” he was recruited into their culture and raised to become an honorable warrior and hunter. Although, as Bo-Katan revealed in “The Heiress,” Mando is considered a “Child of the Watch,” a cult of religious zealots who are likely an offshoot of Death Watch, who want to go back to Mandalore’s tribal past and insist that adherents to their creed never take off their helmets in the presence of another living being.

Din’s origin helps tie the series more firmly to the events of Star Wars: The Clone Wars. As that series unfolds, Mandalore and its surrounding worlds become a hotly contested battleground in the conflict between the Republic and Separatists. That culminates in one of the last and most destructive battles in the Clone Wars – the Siege of Mandalore.Star Wars fans finally got to see the Siege of Mandalore play out thanks to The Clone Wars: Season 7. The Siege of Mandalore is the last of three major story arcs in that final season. While the final episodes don’t show Din Djarin or other characters from The Mandalorian Season 1, it does reveal how Ahsoka Tano’s good intentions in leading a Republic strike force to capture Darth Maul wound up opening Mandalore to Imperial occupation. With Ahsoka herself appearing in Season 2 (played by Rosario Dawson) and an Ahsoka Tano spinoff series announced, the franchise may explore Ahsoka’s lingering guilt over her role in Mandalore’s sad fate.

A Knights of the Old Republic Connection

Even as The Mandalorian forges new links to projects like The Clone Wars and Star Wars Rebels, it also makes an unexpected connection to a much more distant part of the Star Wars timeline. Emily Swallow’s character, The Armorer, recalls the ancient battles between the Mandalorians and the Jedi, a conflict which directly set the stage for the 2002 video game Star Wars: Knights of the Old Republic.

This is actually the second time since the release of Episode IX that a Star Wars project has alluded to the events of KOTOR. The Rise of Skywalker: The Visual Dictionary reveals that one of Emperor Palpatine’s Sith Trooper legions is named after ancient Jedi Master-turned-Sith Lord Darth Revan.

Every Returning Jedi Cameo in Star Wars: The Rise of Skywalker

The timing of these twin KOTOR cameos doesn’t seem coincidental. After years of ambiguity over whether KOTOR and other Old Republic-era stories are still included in Disney’s official Star Wars continuity, it seems this beloved game might be on the way to finally, officially becoming canonized. And hopefully, these subtle callbacks will lead to full-fledged new stories set in the distant past of the Star Wars universe.

For more on The Mandalorian, see all the clues about Sabine Wren potentially joining the series, read up on the timeline of Ahsoka Tano before she debuted on The Mandalorian, and see our breakdown of all The Mandalorian’s actor cameos. And if you want access to loads of Star Wars content, here’s what you need to know about Disney+ bundles, of which there are a surprising number.

Cyberpunk 2077's ongoing development, and CD Projekt Red's approach to refunds, are being investigated and monitored by Poland's consumer protection agency, which has...
Read more
Gaming

We got our best look at Resident Evil Village — or Resident Evil 8 if you prefer — today during Capcom’s livestream reveal...
Read more
Gaming

The Pokemon Company and P-Bandai have announced a new Gengar pillow that allows you to rest your head inside Gengar's mouth and people...
Read more